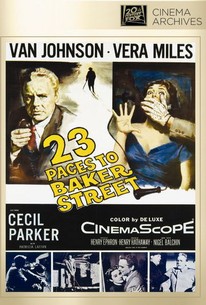 Van Johnson portrays a blind American writer living in London. Blessed with an acute hearing sense, Johnson overhears a kidnapping plot but neither his friends nor the authorities believe him, chalking up his story as the product of a writer's imagination. Disgruntled, Johnson vows to scuttle the kidnapping himself -- with the assistant of his fiancée Vera Miles. Despite his handicap, Johnson puts the pieces together using sounds as evidence and guidance. Ultimately Johnson finds his life in danger when he corners the criminal in a dark alley. 23 Paces to Baker Street was one of several ''50s 20th Century-Fox films shot on location in London to take advantage of Fox's "frozen funds" -- money earned by the studio in England which by law could only be spent in that country.

Cameron A. Grant
as Pinball Player

Michael Trubshawe
as Shop Customer in Photograph (uncredited)
View All

...perhaps the closest Hathaway ever came to making a Hitchcock film.

There are no featured reviews for 23 Paces to Baker Street at this time.