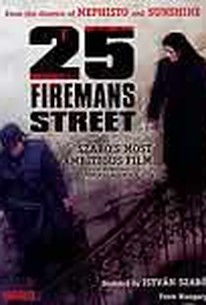 Hungarian filmmaker István Szabó's moving drama concerns the occupants of an old house who gather on the eve of its demolition to reflect on their lives from World War II to the present. Among the residents are Mrs. Gaskoy (Rita Bekes), a baker's wife who hid people from the Nazis in the house's attic, and Maria (Lucyna Winnicka), who remembers her wartime arrest. The house's occupants recall the events of the previous 40 years in fragments, dealing as much with their personal lives as with the sweeping changes brought by the war and the 1956 revolt. The result is a stirring, memorable portrait of human will and perseverance in the face of incredible obstacles. ~ Robert Firsching, Rovi

There are no critic reviews yet for 25 Fireman's Street (Tüzoltó utca 25). Keep checking Rotten Tomatoes for updates!

There are no featured reviews for 25 Fireman's Street (Tüzoltó utca 25) at this time.