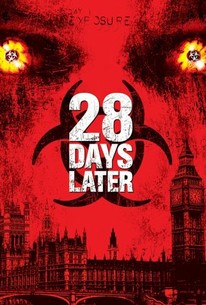 Critics Consensus: Kinetically directed by Danny Boyle, 28 Days Later is both a terrifying zombie movie and a sharp political allegory.

Critics Consensus: Kinetically directed by Danny Boyle, 28 Days Later is both a terrifying zombie movie and a sharp political allegory.

Critic Consensus: Kinetically directed by Danny Boyle, 28 Days Later is both a terrifying zombie movie and a sharp political allegory.

After breaking into a primate research facility, a group of animal rights activists discover caged chimps chained up before banks of screens displaying horrifying, violent images. Ignoring the warnings of the terrified researcher who maintains that the chimps are infected, they begin to free the animals and are immediately subjected to a bloody attack from the enraged creatures. Twenty-eight days later, Cycle courier Jim awakes from a coma in the deserted intensive care unit of a London hospital. He wanders out into a church where he finds dead bodies piled in heaps on the chapel floor. A sudden explosion from a makeshift bomb heralds the arrival of fellow "survivors" Selina and Mark. They take Jim to safety and explain to him that this infection is transmitted by blood and overwhelms the infected victim with a murderous rage within seconds. Britain has been overrun, and they have no way of knowing if it has spread worldwide. Their only hope of survival may lie in the hands of a Manchester group of soldiers, as they claim to have the "answer" to infection and invite any survivors to join them at their blockade. Faced with no practical alternative, the group sets out northwards, unaware that the worst is yet to come.

Twenty-eight Days Later is a zombie flick, which makes it my kind of movie-dare I say, our kind of movie. No cinema zombie ever shambles into view without its agenda.

The possibility of renewal suggested by the survivors' attempts to start over certainly points toward hope. However, the circularity of the movie's plot is most likely to inspire dismay.

The best purely British horror/science-fiction film in decades. And the first great apocalypse movie of the new millennium.

The movie's craft makes the dread of a killer virus contagious: viewers may feel they have come down with a case of secondhand SARS or sympathetic monkeypox.

Heedlessly derivative though it may be, 28 Days Later does what it sets out to do and then some -- scare us out of our wits, then get us to apply those wits to an uncommonly intelligent and provocative zombie flick.

Later does a lot of things right, which makes its third-act missteps even more frustrating.

It pays homage while instilling a new way to speak to this way of storytelling. 28 Days Later isn't the best horror ever, but it manages to spark a fire that still burns nearly 20 years later.

A few ideas are borrowed from George A. Romero, but the brunt of the visuals and story are original and thrilling, though also a touch artsy and marginally poetic.

A truly innovative and disturbing horror fantasy about a modern-day England totally ravaged by plague.

A perfect fusion of lo-fi but gorgeous camerawork, a searing soundtrack and pitch-perfect performances... the film demonstrates how something tender and intimate can also be terrifying and epic.

If you're gonna homage George Romero, do it with some respect, and this Brit import comes loaded. Danny Boyle directs, Alex Garland writes, Cillian Murphy and Brendan Gleason star, it's a power line-up primed to deliver all the tense, sweaty anxiety fear of being eaten alive should bring. Pretty damn cool stuff.

Menacing, grisly and bloody-brilliant to its core. 28 Days Later's combination of heart-pounding terror and gritty realism conjure up a fascinating take on a zombie/infection/plague tale and its real-world-situational trope. 4/5

Early neo-zombie flick is chilling in its unapologetic depiction of our fierce will to survive and the inhuman violence in humanity...and vice versa. Cillian Murphy is a bit bland at first, but then he gets balls-to-the-wall psycho. Naomie Harris (whom I erroneously thought was a recent ingenue) is bold and tough as the pitiless then maternal Selena, and the little bits of humor and camaraderie in this ragtag family are heartwarming. "The Walking Dead" seems to have taken its entire premise from this movie.

A good zombie movie but also more notably a good political allegory, '28 Days Later' works off its' innovative director, even if it is not as quick paced as one might hope from a zombie flick.