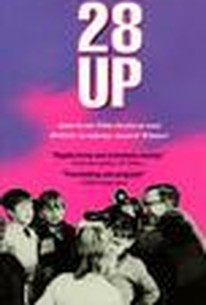 While working on the BBC television documentary series The World in Action in 1963, director Michael Apted, in collaboration with Paul Almond, produced a feature-length study of 14 seven-year-old Britons. Titled 7 Up, the film drew its on-camera personnel from every part of the social strata. Apted and Almond invited the kids to expound extemporaneously upon their feelings, desires, and aspirations. Seven years later, the same 14 people were rounded up for Seven Times Seven, which brought their individual histories up to date. And so it went until 1991, with Apted, now working solo, updating his original 1963 documentary every seven years. In 1984, all existing chapters were bundled together into the British miniseries 28 Up. By far, the best of the updates, as well as the most optimistic, 28 Up was later boiled down to a 113-minute feature film. In both its series and featurized form, 28 Up is a fascinating social document; those who like cushioning themselves against disillusionment, however, are advised to bypass 35 Up (1991), wherein the 14 middle-aged subjects are a lot more fearful about their future than they'd even been before. ~ Hal Erickson, Rovi

Critic Reviews for 28 Up

The effect of 28 Up is to bring a dimension of wisdom and insight to the earlier footage, and in doing this Mr. Apted has been subtle and selective.

The 14 subjects of the "Up" series came together as a group only twice, and by the end of 28 Up, three have dropped out of the project.

It is almost scary to realize that this film has given me a fair chance of predicting what lies ahead for these strangers. I almost understand the motives of those who chose to drop out of the experiment.

No matter how it's interpreted, the film remains a deft and compelling piece.

A real mind-bender. Apted invented a new documentary form with this series.

This is, after all, an ongoing project, and one which is certain to grow more mesmerizing with each new installment.

Brilliant. One of the landmark documentaries.

Audience Reviews for 28 Up

Apted's questions are much more intelligent and less judgmental now than in the previous films, making this the best installment so far as it shows us how fascinating those people and their lives have become with time, even if he leaves the most interesting stories for the beginning.

28 up is the year most of the subjects suddenly have kids.

With this installment in the series we lose two of the "kids". They decide not to participate anymore. It's unfortunate but ultimately their choice,
Huge changes come this time around as we see our folks with families and adult lives and thoughts. Gone are a lot of the cockiness of youth. A lot... not all. Some folks seem to know who they are and what they want while others seem lost in life still.
It was nice to see a couple of the "kids" grow up and stop being the brats they were in the last couple installments.

didn't see 21 up regrettably because my hold didn't come in yet, but these heartbreakingly beautiful stories hit a chord with me. a tad too long and out of the kids some of them have undeniably more interesting stories than others. like who could forget neil? my gosh that man/boy makes me sad just to look at him. or symon, or bruce, or snobby john with a hint of truth behind his pontifications? it's amazing watching these kids growing up, making surprising changes. yet you can still see the initial kid in them, which is something i find both wonderful and eerie.