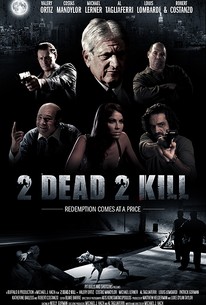 A drug addicted former narcotic agent, known on the street as Mason Jars, finds a journal that holds the key to the whereabouts of millions of dollars worth of heroin. The man that hid the journal has just been torn to shreds by a drug kingpin's doberman pinscher. Along with a beautiful stripper, (who's father happened to be the man that stole and hid the drugs)... they suddenly find themselves in a race against time to find the drugs and return them, before they become the next casualty of the crazed drug kingpin Alphonse 'Dente'.

There are no critic reviews yet for 2 Dead 2 kill. Keep checking Rotten Tomatoes for updates!

There are no featured reviews for 2 Dead 2 kill at this time.