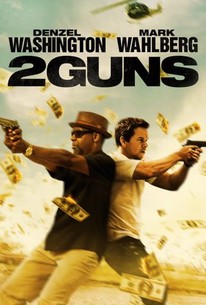 Critics Consensus: Formulaic and often jarringly violent, 2 Guns rests its old-school appeal on the interplay between its charismatic, well-matched stars.

Critics Consensus: Formulaic and often jarringly violent, 2 Guns rests its old-school appeal on the interplay between its charismatic, well-matched stars.

Critic Consensus: Formulaic and often jarringly violent, 2 Guns rests its old-school appeal on the interplay between its charismatic, well-matched stars.

Two crooked undercover officers - one from the DEA and the other from the Navy - unknowingly lead investigations on the other in this crime thriller from director Baltasar Kormakur. Mark Wahlberg, Denzel Washington, and Bill Paxton head up the starring cast. ~ Jeremy Wheeler, Rovi

Ritchie Montgomery
as Chief of Police

Henry Penzi
as Roughneck #4
View All

Movie rule 12: Mistrust anything bearing a '2' in its title - particularly when it's not a sequel. But 2 Guns proves a totally unexpected exception.

Washington and Wahlberg have a good time robbing banks and blowing up buildings and barreling through military security checkpoints and double-crossing people and shooting each other because none of it really means anything.

That a movie this fleet and lean succumbs to action-blockbuster bloat in the home stretch is both disappointing and predictable, although the director deserves credit for keeping the climactic shootouts slick and spatially coherent.

Mark Wahlberg reunites with Contraband director Baltasar Kormakur for an action movie that's even more cynical and sadistic than its predecessor.

Despite not owning an ounce of originality, 2 Guns more than makes up for it through the chemistry of Washington and Wahlberg.

In lesser hands, this clash of severe situations and insolence in the face of death might fail, but both Denzel Washington and Mark Wahlberg are convincing.

The film will at least give you a solid two hours of escapist fun before sending you back out into the real world.

The screenplay convolutes different characters and plot threads into a mess ... By the time we get to the big showdown, I found myself thinking, 'How did we get here again?'

"2 Guns" doesn't delve into any unexplored territory, but it delivers precisely what the it promises, shootouts and wise cracks.

It takes two actors you would never think to put together ... reworks and restructures [the genre's conventions] and puts the puzzle pieces together to make a picture that is completely different than the one on the box.

Buddy comedy by the numbers, entertaining but forgettable, especially when you care little about what's going on on the screen and you're ultimately wondering what all the fuzz was all about. Only the protagonists' chemistry makes this somewhat watchable.

My first Movie for 2014, I really thought that there was every chance I'd not like this movie, and was pleasantly surprised to find it exciting, action-packed, humorous and more than a bit convoluted. The acting was, as one would expect, brilliant with Mark Wahlberg and Denzel Washington having the time of their lives. The story took some following trying to figure out all the convolutions taking place with CIA and the Navy figuring prominently, but it was great fun, and the violence while never-ending was not over the top like some others today. I have to say that I felt Wahlberg stole the show with his comedic side strongly brought out. Go and see it, but do not try to figure out all the ins and outs too seriously. Great entertainment. 4 Stars 1-1-14

Denzel Washington and Mark Wahlberg aren't strangers to fronting acclaimed films in equally acclaimed performances; but they have something else in common. Neither actor has shied away from making a plethora of less critically prestigious, Hollywood action pictures; often heightening the proceedings with charisma alone. "2 Guns" is such a movie, and because of it's stars is also a good one. Directed by Baltasar Kormákur, who previously worked with Wahlberg on the solid "Contraband," "2 Guns" establishes itself as an equally energetic take on familiar material from the very first scene. The snappy dialogue, humor, and great chemistry between leads last throughout and isn't tired after this initial sequence. Along the way we get the likes Bill Paxton, James Marsden, and Edward James Olmos who indulge in a little screen chewing of their own. For an action movie with ambitions planted firmly in the visceral, "2 Guns" is surprisingly teeming with plot. There's the obligatory cross, double cross, hell even a quadruple cross, in a deceptive web that involves two undercover agents, the CIA, Naval intelligence, and even a drug cartel... oh my! Halfway through I didn't know who was playing who yet, or how everything fit together, but too the writer's credit, we never feel overwhelmed, duped, and everything ties together in an entertaining whole. The film does end abruptly after a fun build up, which is one of my only knocks plot wise. Even with everything I've just said, "2 Guns" comes down to Washington and Wahlberg. They are exciting to watch and have a great, more importantly believable chemistry. The stakes get high, but we never believe they are in anything but complete control. They command their standalone actioners, but for obvious reasons the results are even more successful here. "2 Guns" is great fun, with a complex plot that is a tribute to it's comic roots. We get a lot of films like this each year, but director Kormákur's stylish effort is one to see regardless. It is derivative. But it's rock solid and elevated by it's two leads.

If it wasn't for some cool action sequences and awesome chemistry between Denzel Washington and Mark Wahlberg, "2 Guns" would just be another average action flick, with a bland script and dumb plot lines. It's not the best action film ever, but the unique way they use storytelling in this film is very fun every time these actors are on the screen you will find yourself smiling, due to their vibrant presence. "2 Guns" has a well enough written script, it is directed very well, and the camerawork is not ham-handed in any way. I would definitely watch this film again, and that is not just me being modest. Sure it may suffer from a few predictable plot elements, but it comes right out of the gutter and surprises you. "2 Guns" is a very fun movie!