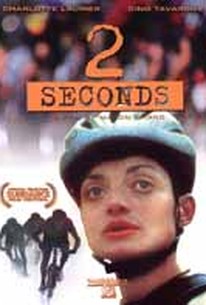 This Canadian film (in French) premiered in the 1999 Sundance Film Festival's World Cinema section. It tells the story of Laurie (Charlotte Laurier) and her love of downhill mountain bike racing. At the start of a big race, Laurie notices a gray hair on her head; her hesitation while noticing this causes her to lose the race by two seconds, forcing her retirement from racing. Angry, she moves to Montreal to stay with her brother, a physicist who is big on loose women and theories of relativity, and she gets a job as a bike messenger. At work, she meets a crusty old man named Lorenzo (Dino Tavarone), who was a champion cyclist himself before settling down and opening a bike shop. Though enemies and competitors at first, they slowly become friends and lovers, and teach each other that time (whether it's 50 years or two seconds) is a relative concept. ~ Arthur Borman, Rovi

There are no critic reviews yet for 2 Seconds. Keep checking Rotten Tomatoes for updates!

There are no featured reviews for 2 Seconds at this time.