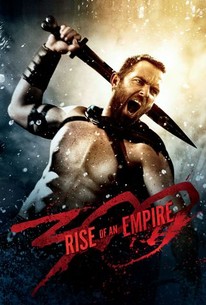 Critics Consensus: It's bound to hit some viewers as an empty exercise in stylish gore, and despite a gonzo starring performance from Eva Green, 300: Rise of an Empire is a step down from its predecessor.

Critics Consensus: It's bound to hit some viewers as an empty exercise in stylish gore, and despite a gonzo starring performance from Eva Green, 300: Rise of an Empire is a step down from its predecessor.

Critic Consensus: It's bound to hit some viewers as an empty exercise in stylish gore, and despite a gonzo starring performance from Eva Green, 300: Rise of an Empire is a step down from its predecessor.

Based on Frank Miller's latest graphic novel Xerxes and told in the breathtaking visual style of the blockbuster "300," this new chapter of the epic saga takes the action to a fresh battlefield-on the sea-as Greek general Themistokles (Sullivan Stapleton) attempts to unite all of Greece by leading the charge that will change the course of the war. "300: Rise of an Empire" pits Themistokles against the massive invading Persian forces led by mortal-turned-god Xerxes (Rodrigo Santoro), and Artemisia (Eva Green), vengeful commander of the Persian navy. (c) WB

Andrew Pleavin
as Daxos
View All

News & Interviews for 300: Rise of an Empire

Who Should The Aliens Fight Next?
RT Podcast: Ep. 024 – Transformers: Age of Extinction, The Leftovers
New on DVD & Blu-Ray: 300: Rise of an Empire, Enemy, and More

Critic Reviews for 300: Rise of an Empire

300: Rise of an Empire... may focus on the brawny Greek and Persian battles of the 480-479 BC era, but it also presents a kickass group of complex women characters whose sexual prowess is as mighty as their swords.

[The story] gets constantly literally swamped by the blood and gore and so forth, which is well done but almost to the point of parody.

The big box-tick here is that it is the women who ultimately command the impressively surging CGI hordes on both sides.

The mere existence of 300: Rise of an Empire is worthy of note, especially the inventive means by which the story has been advanced.

Considering the level of carnage, it's astonishing how dreary it all manages to be, with computer-game visuals and Carry On dialogue conspiring to render everything dead in the water.

Artemisia may ultimately have lost the war in this clash of civilizations, but she wins our hearts.

Skulls split, crows feast, and golden calves jiggle in the sun-kissed air - spectacle begets spectacle. In the end the movie doesn't hold together as well as the first one, but good hell it's some fun while you're up in it.

A great villain and some fun action scenes almost make up for the plodding plot but the brutishness of the storytelling makes the original feel positively light hearted by comparison.

A film of excesses.

Exists almost solely for us to behold the repeated battles between the Persians headed by Xerxes and Artemisia and the Greeks.

While 300: Rise of an Empire might have more story than its predecessor ... it feels like less of a film, overall.

It rehashes old ideas and seems to bask in the gross and problematic elements of the original, unaware of the changes in social attitudes that had occurred between the production of the two films.

Audience Reviews for 300: Rise of an Empire

A cheap excuse for an obvious rehash that, despite gorgeous visuals, has no vitality, intensity or a personality of its own - and its lame hero is even obfuscated by the sexy villain played by Eva Green, who we end up rooting for to slaughter every single Greek in that place.

The ties to the chronologically simultaneously happening original film are actually pretty well done. The story is not as straight forward and the visuals not quite as unique and striking, but still pretty impressive. The action is top notch, though and while some dialogs are just as shallow in their "die for honor" pathos the result is overall really entertaining. The end comes a little suddenly, while I would have been okay with following those battles a little longer. Still, pretty decent.

Not as visually impressive as the first "300" film, but it is still quite nice. The acting is rather poor and passionless with the sole exception of Eva Green who plays her roll of a an evil warrior temptress to the hilt. The story is coherent and somewhat entertaining, but not really as epic as history would have allowed.

Noam Murro's 300: Rise of an Empire never rises to greatness. Partly narrated, the 90 minutes of storytelling tends to get a bit tedious. The back story is a plus, along with some of the character background, but other than the 2 major leads, everyone else is forgettable. Done with a ton of green screen and splattered with CG blood, 300: Rise of an Empire gets tiresome visually. Other than some stylized swordplay in the finale, the violence is mildly amusing at best and hampered at times while the speed slows. Eva Green works her minutes with a high success rate. Her line delivery is fitting for her role. Lacking a bit in the charismatic department, Sullivan Stapleton still manages to put together a lead character. Despite some shining moments, 300: Rise of an Empire as a whole dissatisfies. No rise of an empire here.