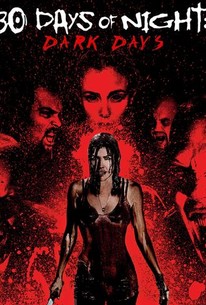 Nearly a year after the vampire siege of Barstow, Alaska, lone survivor Stella (Kiele Sanchez) discovers that she isn't alone when she's recruited to eradicate the vampire menace once and for all. Her waking hours filled mourning the death of her late husband and her dreams haunted by visions of the creatures that turned him into a monster, Stella becomes the subject of much ridicule when she makes it her mission to convince the public that vampires truly exist. But just as the embarrassment is becoming too much to handle, three strangers (Harold Perrineau, Diora Baird and Rhys Coiro) present Stella with an opportunity to seek revenge by killing Lilith (Mia Kirshner), the vampire queen behind the Barstow massacre. Armed to the teeth and ready to die fighting, the brave quartet descends into the sewers beneath Los Angeles and begins their search for the elusive Lilith. But should she manage to find them first, the vampires will once again gain the upper hand.

...the film is, in the final analysis, simply unable to live up to the better-than-average standard set by its superior predecessor.

Dark Days is hardly mediocre, but barely interesting; lacking a solid hook like the first film.

A clever vampire concept devolves into another chintzy 'Blade' knock-off.

Prominent with a lagging pace, a dull atmosphere, lack of real scares, and a plot filled with holes and lapses in logic...

An engaging diversion, making the most out of its limited resources, boosted by a capable cast and some nifty make-up effects. In fact, it's a more satisfying bloodsucker yarn than the 2007 original.

There is no fun in this movie and it's definitely not cool enough to be serious. The characters are all so morose. Oh, my family was killed by vampires, boo hoo.

30 Days of Night: Dark Days, from Ben Ketai, should remain in the dark because there isn't much going on here.

Although a direct sequel of its predecessor, 30 Days of Night, the story behind this picture is enough to stand on its own. With that said, even though it can be called brief with a runtime under 90 minutes, there isn't much in the way of intrigue in the story.

The violence is bloody as expected, but everything else from the action to the CG is mediocre, which all adds up to a disappointing conclusion to the film.

All around, the characters and the acting are sandpaper dry. It's not a problem staring at Kiele Sanchez, but her performance had no life to back up the looks.

30 Days of Night: Dark Days doesn't offer anything to recommend. Look at the cover and move on.

Maan, this movie did not need to be as bad as it ended up being. It seemed to remove all the narrative strengths of the first movie, and focussed instead on the villains. Sure they're scary, but they're not terribly interesting. And they didn't flesh Lilith out enough to make her a believable foe, let alone an engaging one. Why, exactly is she the head vampire? Where did her power come from? Why did she order the siege of Barrrow? Why would anyone willingly work for these vampires? I don't remember the comics being this derivative. The characters here seem flatter, the story logic seems a little more slippery and the scares a little more foundless. Stella wasn't a particularly likeable character, and she doesn't really make any friends worth watching, either. I didn't care what happened to thier ragtag team of vampire slayers. Also, the element of "we're trapped here in Vampireland" that was so vital to the original is cut back significantly in this movie. I think this movie should have spent more time underground in the vampires' sunless base, or on the ship, to best recreate the atmosphere that really defined the first. I think, anyway.

Not bad for a straight to DVD release but no where near as good as the first. It's on a much lower budget and it shows. It does follow on from the first, so you'll need to see that if you haven't already. It has a recognizable cast with Kiele Sanchez (A Perfect Getaway) replacing Melissa George from the first film. It has a few good bloody moments but descends into being another hunt the Vampires film and that has been done much better before. Not awful but not up to the levels of the first.