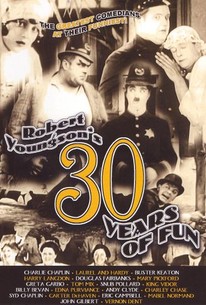 This third in a series of documentaries of silent era comedy classics produced by Robert Youngson covers the thirty year period of hilarity from the 1890s to the 1920s. The first appearance of Laurel and Hardy is shown. In "The Lucky Dog", the duo first acted together, but it was another eight years before the legendary lugs would team up for good. The amazing athletic prowess of Buster Keaton is featured, and the comedic and cinematic innovations of Charlie Chaplin are illustrated on four separate occasions. Charlie Chase, Billy Bevan, Ben Turpin, Snub Pollard and the ever laconic Harry Langdon strut their stuff in this timelessly funny anthology. Sadly, the life and death of Langdon mirrored his woeful visage, causing a friend to comment "he was the saddest man I ever knew." Fortunately, Langdon and his comedic cohorts live on as nearly four generations of admirers have laughed along with their hilarious comedy capers.

Jay Jackson
as Narrator
View All

Critic Reviews for 30 Years of Fun

There are no critic reviews yet for 30 Years of Fun. Keep checking Rotten Tomatoes for updates!

There are no featured reviews for 30 Years of Fun at this time.