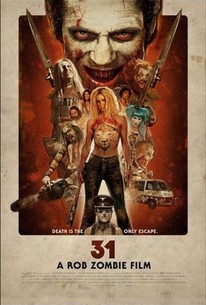 Critics Consensus: 31 delivers all the high-energy gore Rob Zombie fans have come to expect, but a lack of fresh ideas and likable characters mean only the already converted need apply.

Critics Consensus: 31 delivers all the high-energy gore Rob Zombie fans have come to expect, but a lack of fresh ideas and likable characters mean only the already converted need apply.

Critic Consensus: 31 delivers all the high-energy gore Rob Zombie fans have come to expect, but a lack of fresh ideas and likable characters mean only the already converted need apply.

31 tells the story of five carnies in 1976 kidnapped on the morning of Halloween and held hostage in a remote industrial Hell. While trapped, they are forced to play a violent game called 31. The mission is to survive 12 hours against an endless gang of grease-painted maniacs.

Zombie may not be working outside of his comfort zone, but 31 is one of his most impressive films to date.

Horror piles on horror, absurdity on absurdity, all of it treated by Zombie with carnivalesque abstraction.

The Rob Zombie brand promises hard-core horror and scuzzy atmosphere, and "31" delivers just that. Even on autopilot, Zombie makes movies that hit hard and leave a stain.

Rob Zombie can do better than 31. For proof, just watch any other Rob Zombie movie.

Isn't as unwatchable as other similar movies, but it's still pretty deplorable and offensive.

it was really clever... you find yourself really getting into it.

It's what you might expect a Rob Zombie movie to be if he had never made another movie, much less some of the most interesting and distinctive horror films of the last 10-15 years.

While hardcore fans of Rob Zombie's black-as-coal humor and grindhouse-horror style will most likely delight in this campy, gore-filled romp, 31 lacks the wit and charm of his early films.

[T]his is relentlessly entertaining, brilliantly bloody, carnie carnage with a career-defining performance from Richard Brake at its heart.

An exercise in fetishized depravity.

Fake intensity...the characters we were supposed to empathize with aren't really developed at all...

31 was made very quickly on a shoestring budget, and it shows in Rob Zombie's worst film to date. Bizarrely though, it also features what might just be the best performance of Richard Brake's career. And that is no small feat, the man is a proven talent. Still probably skippable for the moviegoing community at large, but worth the time of a hardcore devotee.

Long awaited Zombie film was a total waste of time. I've been waiting for 31 for over a year because I am a big fan of his House of 1000 Corpses and Devil's Rejects, but this is a pure crowd source cash grab. The idea behind the film was on a weird statistics that more people go missing during Halloween; in reality, Zombie wants to continue to make films about Halloween without much effort. The plot is about 5 carnies trapped by weird people in wigs and Victorian make up. forced to play a game called "31" (likely to mean October 31st) where they have to fight killer clowns in 12 hours, if they survive, they may leave. We are immediately introduced to what appeared to be another game a year before the film started, Doom-head slowly tortures a reverend to death. This was actually promising, until we are returned to the present. 8 carnies are on a road trip to the next stop, then at night they are attacked by a bunch of clowns and 3 of them were killed. The rest were brought to a mansion where they are given 12 hours to survive hordes of killer clowns. None of the carnies had any personalities whatsoever, it was evident that Sheri Moon's character is the final girl. The first clown was "Sick-head", a Mexican Nazi midget... Then the next two were brothers "Psycho-head" and "Schizo-head" who wielded chainsaws. Then we had "Sex-head" and "Death-head" who were a couple in S&M costumes. Then finally, "Doom-head" returned again to finish the job. It was really formulaic and predictable, there was no connection with any characters, you just want to see the film end. The gore and violence were just mild to say the least, it was certainly better than Lords of Salem but it is still a huge disappointment.