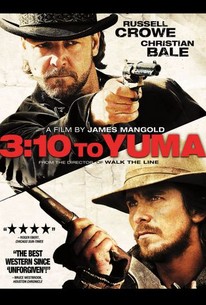 Critics Consensus: This remake of a classic Western improves on the original, thanks to fiery performances from Russell Crowe and Christian Bale as well as sharp direction from James Mangold.

Critics Consensus: This remake of a classic Western improves on the original, thanks to fiery performances from Russell Crowe and Christian Bale as well as sharp direction from James Mangold.

Critic Consensus: This remake of a classic Western improves on the original, thanks to fiery performances from Russell Crowe and Christian Bale as well as sharp direction from James Mangold.

Russell Crowe plays a desperado whose accomplices stage an ambush after he is taken into custody by a determined local sheriff in this remake of the 1957 film starring Glenn Ford and Van Heflin. James Mangold directs a script based on the Elmore Leonard short story and penned by Stuart Beattie, Michael Brandt, and Derek Haas. ~ Jason Buchanan, Rovi

Sean Hennigan
as Marshal Will Doane

Critic Reviews for 3:10 to Yuma

Both dull and deeply unnecessary; a stinker.

It is part of the richness of 3.10 to Yuma that this is a classical piece of storytelling with themes and characters that can be found in the very earliest Westerns.

Nothing terribly original happens in this remake of a 1957 semi-classic that starred Glenn Ford and Van Heflin, but everything happens smoothly and with grace.

[I]f you're looking for an Unforgiven-style reinvention of the Western, prepare for disappointment.

The film is a creditable remake - no better than the original but different enough to stand on its considerable merits.

Mangold's film is more than sufficiently subtexty and cynical for our modern sensibilities while simultaneously embracing Mangold's obvious pleasure in the Westerns' time-honored swinging saloon doors and stern masculine traditions.

'We're going to Contention.' One of the best remakes in the last twenty years.

The basic plot - Old West environment or not - is an amusing choice to reintroduce to audiences, since most viewers will be unfamiliar with the 1957 adaptation.

2007 may very well be the year when the Western comes riding back into town.

3:10 to Yuma is not only exciting, well-acted, and engaging, but it also reveals a deep sense of spirituality; of right and wrong.

A solid, gritty drama getting the most out of its starpower.

Take(s) a tried-and-true genre and make[s] it rousing and fresh.

Audience Reviews for 3:10 to Yuma

3:10 To Yuma is a remake of the 1957 Glenn Ford western in which an honest rancher injured in the civil war takes on the job of escorting a notorious outlaw to the prison train in order to save his family's ranch from the railroad. This film really does retain the spirit of the original as it has a real old-fashioned feel to it. The direction is glossy rather than gritty and the story of two contrasting personalities learning mutual respect under adverse circumstances is hardly a new one. But Bale and Crowe put in a couple of great performances, bolstering the rather workmanlike themes; Bale's down at heel working man trying to find some self respect and Crowe's educated and charming but ruthless outlaw spark off some really good chemistry, particularly during the great showdown finale. It probably won't win over anybody who does not like traditional westerns but it's a very well executed and enjoyable tale for those who do.

A movie that is able to call back to the simplistic fun of golden age Westerns while still exploring complex character relationships. "3:10 to Yuma" is my favorite Western thanks to spectacular action, engaging performances, and a sense of adventure and freedom that just isn't that common anymore.

Christian Bale continues to shine as one of his generations best.