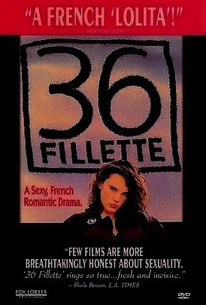 Titled after the name of a little girl's dress size, the coming-of-age drama 36 Fillette follows a couple days in the life of 14-year-old Lili (Delphine Zentout), whose physically mature features contrast with her immature adolescent angst. Away from her home in Paris, she is painfully bored during a summer vacation in a windy little campground near the resort town of Biarritz. She's stuck with her emotionally unavailable parents (Adrienne Bonnet and Jean-Francois Stevenin) and older brother J.P. (Stephane Moquet). After some blatant begging on her part, J.P. eventually agrees to take her out to a disco. They don't have a car, so they hitch a ride from the middle-aged Maurice (Etienne Chicot), who is out cruising in his sports car. Maurice and J.P. go to a disco, but Lili is too young to get in. She spends the evening at a café talking to the celebrity musician Boris Golovine (Jean-Pierre Leaud), but she agrees to meet Maurice for a date at midnight. After much pleading with the doorman, Lili is allowed in to the disco where she dances with Maurice. Eventually, she leaves the club with him and spends the evening in his fancy hotel room. 36 Fillette was written and directed by Catherine Brelliat, who adapted the screenplay from her own semi-autobiographical novel. ~ Andrea LeVasseur, Rovi

Its whole delicate existence depends on the performance by Zentout, a 16-year-old in her acting debut. She gives a brave and convincing performance.

The Jan Brady of the filmmaker's trilogy of puberty-agonizing explorers

By not making judgments on the characters it endows the audience with the greatest understanding of the situation.

A coming of age tale about a French Lolita. It's a difficult subject matter but never exploitive. It's only a short film but it is incredibly slow at times with lots of walking and sitting around waiting which can drag on at times.

I agree with the most recent review put forward by Cynthia M...whoever the heck that is. I like Breillat films because I find them so disturbing on so many levels. There is nothing quite like a decent film that remains in your mind for years afterwards.

[font=Century Gothic]In "36 Fillette", Lili(Delphine Zentout) is a 14 year old teenager who is vacationing on the seashore with her parents and 17 year old brother. She persuades her parents to let her go clubhopping with him. While hitchhiking on the way there, they catch a ride with a wealthy and older stranger who Lili takes an attraction to. Later, Lili accompanies him to his hotel room.[/font] [font=Century Gothic][/font] [font=Century Gothic]Catherine Breillat continues her fascination with teen sexuality in "36 Fillette" but tells a better constructed story than she did in "A Real Young Girl." I rather liked the ending, too.[/font]