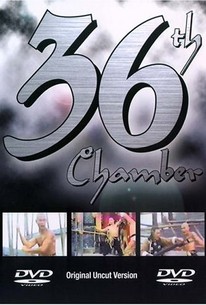 Liu stars as the chief Abbot of Shaolin and its 36 chambers. He must keep the new rambunctious monks in line through strict martial-arts discipline.

What's best by far about The 36th Chamber of Shaolin is its drawn-out middle act, where our hero struggles to learn Shaolin Kung Fu the gruelling way, failure after half-advance after small success.

...this movie owns Tarantino's ***. And I bet Quentin would admit it, too.

The main reason I watched this is that I've long been a fan of The Wu Tang Clan's famous 1993 album Enter the Wu Tang 36 Chambers, to which this movie is clearly the namesake. Since that album mostly focuses on typical Hip-Hop stuff like shooting motherfuckers and having lots of money, I didn't really expect there to be any real parallels between the lyrics and the film, but if the RZA likes something enough to name an album after it's probably worth checking out. The movie was different from most martial arts films as it focuses less on fighting than it does on the actual training of a shaolin monk, which is a pretty interesting thing to focus on, after all most of these movies starts out with their hero already being a badass. Just the same the various training excersises are pretty creative, and the movie mercifully never resorts to a training montage and there are eventually some pretty cool fights in the last thirty minutes of the movie. My main complaint though, is that the actual conflict surrounding the training section of the movie seems a bit half-assed. It's hard to tell story in the first and last half hour of a movie and have something else interrupt it midway through and not see any of the initial conflict for an hour. The very ending was also kind of weird and the film has some of this genre's less charming trademarks like terrible sound effects and fake looking weapons. Still I had a lot of fun with it. The Dragon Dynasty DVD had just as good picture quality as Come Drink with me, but I noticed some grammar problems in the sub-titles.

If there is a film that can turn you into a classic kung fu movie fan, this movie may just be it. This film is pretty much everything you would expect from the kung fu genre.

The story is pretty straight forward. Corrupt official comes to town. Man loses his friends and family. Man leaves and trains in the art of kung fu. Man returns and gets revenge. Nothing spectacular by any means, but it works. Unlike some other films that are filled from cover to cover with kung fu action, this film teases you in the beginning and then saves everything else for the end. Yes, this film may seem slow, but the two hours go by rather quickly. The whole middle portion of this film is all training. I know training doesn't seem all that interesting, but this film makes it entertaining. The various types of activities, the comedic background music, the failures, and the successes are all there. You should not be bored.

The concept of the 36th Chamber seems a little lame, but it easy to understand. It isn't even that big a part of the film. The choreography of the fights are great, as usual, and they are even better with the classy sound effects. The ending of this film is abrupt, which may disappoint a few, but that should be expected here.

The acting is pretty good. Gordon Liu shows that he can do more than fight. His performance should make you respect him even more in Kill Bill.

If you have never seen a classic kung fu film before, this is a great movie to get you started. If you are already a fan, then this shouldn't disappoint.

This may possibly be the best Kung-Fu movie of all time. Some could argue that "Enter the Dragon" holds that title, but this movie has a better story, better acting, and just as much acting. The story is multi faceted, involving self discipline, revenge, Eastern philosophies, political turmoil, and perseverance. A young man, San Ta, is studying in school when his village is taken over by a new ruling dynasty. His shop and family is taken from him. Wounded, he makes his way to a shaolin temple, intending to learn Kung-Fu and get back at those who have harmed him. During this time he learns more about the ways of shaolin and the monks that practice it. San Ta discovers that there are more issues to be concerned with besides fighting. The 36th chambers refer to the true methods that Shaolin was built from. Shaolin is basically the Chinese version of Jedi, meaning that much thought and practice goes into the training process. The movie is essentially about training. We see San Ta go through almost all of the chambers, advancing his way into a master monk, only to realize that he should not only be concerned with revenge, but being able to teach others of the ways of Kung Fu, to fight for what is right. This movie realy has it all. A well explored story, good characters who are fairly well acted, good scenery, a good score, thrilling sequences, humor, violence, and of course the action sequences. The action is very well handled. They are done in long takes, with out the quick cutting methods of today. We see a bunch of different moves all in one scene before an edit, and it is really impressive.