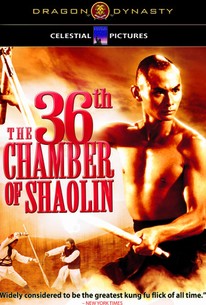 Lau Kar-leung directs this revenge thriller, widely considered to be the greatest kung-fu flick of all time. Liu Yu-te (Gordon Lau Kar-fai) is a gentle ethics scholar until his family and friends are brutally slaughtered by a band of Manchu troops. Vowing revenge, he ventures to the fabled Shaolin temple hoping to become a one-man martial arts killing machine. Rechristened San Te, his first year at the temple is spent largely doing menial chores. His begins training during his second year, which involves passing through 35 chambers where he learns the finer points of kung-fu through grueling and excruciating tests. After a year of training, he moves on to learn about weapons. He soon proves to be the finest student in the history of the temple, mastering the entirety of the training in mere five years. He is cast out of the temple, however, for wanting to teach his skills to the masses. Once out of the temple, he assembles a team of fighters and sets out to get revenge. ~ Jonathan Crow, Rovi

Lung Chan
as Abbot in charge of Staff Chamber

Shen Chan
as Abbot in charge of Wrist Chamber

36th Chamber's nearly hourlong training sequence overshadows the rest of the movie, but it's the stuff of action-cinema legend.

Despite its relative lack of star power and modest budget, this Shaw Brothers kung fu movie was acclaimed in its day and is regarded as a landmark of the genre.

Gordon Liu's masterpiece returns to DVD in a terrific new edition that reconfirms its classic status.

there is a reason that this is considered by many to be the greatest kung fu movie of all time. the training sequences are among the best and most comprehensive ever filmed, the story isnt quite unique but it is well crafted, and the fight sequences are solid. an amazing fictional tale that attempts to offer a possible history of the bringing of shaolin kung fu to the masses.

A solid notch above almost all other Shaw films I've seen, this one was more exciting and dramatically developed than the usual. And it looked great in HD.

San Te: So many people have had to suffer because of men who have the same attitude as you. Widely regarded as the greatest kung fu film of all time, this iscertainly no overstatement. 36th Chamber of Shaolin is truly the film to see where you have some really good fight choreography and a very strong plot, all while filling out all of the various factors one would think of when concerning a kung fu film. Gordon Lui stars as a young man at a time of crisis in China. The anti-Ching patriots, under the guidance of Ho Kuang-han, have secretly set up their base in Canton, disguised as school masters. During a brutal Manchu attack, Lui manages to escape and devotes himself to learning the martial arts in the Shaolin Temple, in order to seek revenge. During this time, he learns the ways of Shaolin, soon understanding what is more to life than just his thoughts of revenge. Following years of training, some in a brutal sense, Lui has the chance to return to his hometown. While the beginning sets things in motion, the movie really kicks into gear once Lui's training begins. It is here where the movie truly shines, showing us the kind of devotion and elements to think of when looking at Shaolin. This film easily has my favorite training scenes of all time, devoting a bulk of its run time to a character learning his ways in an entertaining and solidly made fashion. The fight choreography is great here. Mixing the cheesy sounds of a kung fu flick with the long shots of these performers performing many moves at a time, without the aid of rapid editing or noticeably clever camera tricks. This truly stands as one of the great, influential kung fu films. If there was ever a place for someone to start on kung fu films with, and ones that they could both enjoy and take seriously, this would be it. Monk: You may challenge me at any time you wish.