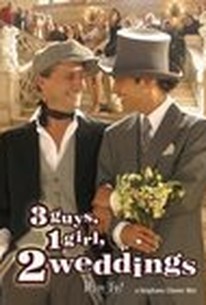 When the gay roommate and best friend of a commitment-phobic radio show hosts learns that his womanizing roommate is planning to settle down, he does everything in his power to sabotage the wedding plans and win the unassuming roommate for himself in this comedy that proves love can come from the most unexpected of places. While Dan spends his days hosting a sex-oriented radio show and bedding as many females as possible, his lovelorn roommate Laurent campaigns for gay marriage with the singular goal of ultimately winning Dan's hand in marriage. When Laurent discovers that Dan has finally found the woman of his dreams and is finally willing to take the plunge, he sets into motion a complex plan aimed at scaring Dan out of his plans and eventually converting him to homosexuality. As the wedding plans continue and Dan asks Laurent to be his best man, the heartbroken Laurent must summon the courage to let Dan know how he really feels or face the prospect of losing not only his best friend, but the man of his dreams as well. ~ Jason Buchanan, Rovi

Julie Amigorena
as Camille
View All

There are no critic reviews yet for 3 garçons, 1 fille, 2 mariages (3 Guys, 1 Girl, 2 Weddings). Keep checking Rotten Tomatoes for updates!