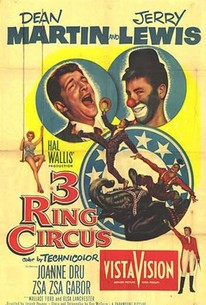 According to some eyewitness reports, the feud between Dean Martin and Jerry Lewis was at its peak during the filming of Three Ring Circus. Other observers have noted that the boys behaved with thorough professionalism throughout the shoot. Whatever the case, the film offers a comparatively relaxed Martin and Lewis, wandering through a thinnish plot with amiable finesse. The boys play a couple of ex-GIs who use their discharge money to finance a trip to Florida, where Jerry Hotchkiss (Lewis) hopes to land a job as a circus clown. Pete Nelson (Martin) isn't quite as ambitious, though he decides to stick around when he meets gorgeous circus owner Jill Brent (Joanne Dru). As the plot rolls merrily on, Pete finds himself assisting temperamental aerialist Saadia (Zsa Zsa Gabor), while Jerry does his best (which is none too good) as the assistant to lion tamer Schlitz (Sig Ruman). When Puffo the Clown (Gene Sheldon) drinks himself into oblivion, Jerry takes Puffo's place, proving his worth by getting a crippled child to laugh. The songs are mostly forgettable, with the exception of the now-standard "It's a Great, Wide, Wonderful World."

Al Hill
as Circus Roustabout with Message from Sam

Martin and Lewis could have used fresh material.

Martin and Lewis at their worst.

There are no featured audience reviews yet. Click the link below to see what others say about 3 Ring Circus (Jerrico, the Wonder Clown)!