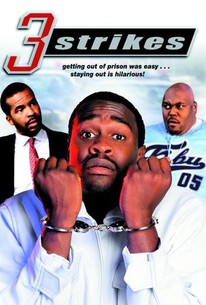 Critics Consensus: 3 Strikes lacks direction and its low-brow humor isn't even that funny.

Critics Consensus: 3 Strikes lacks direction and its low-brow humor isn't even that funny.

Critic Consensus: 3 Strikes lacks direction and its low-brow humor isn't even that funny.

Noted hip-hop producer DJ Pooh, who co-wrote the urban comedy Friday, makes his directorial debut with this comedy-drama. A young African-American man is enjoying his freedom after his second stretch in prison. Under the "three strikes and you're out" law, another brush with the police could mean life behind bars, so he's determined to stay out of trouble. He quickly learns, however, that trouble has a way of finding him, no matter where he goes. DJ Pooh also stars in 3 Strikes, alongside N'Bushe Wright and Brian Hooks.

Jerry Dunphy
as As Himself

John Tamburro
as Pilot
View All

Relies much too heavily on multiple repetitions of gags that aren't especially funny the first time around.

Unoriginal and insulting, 3 Strikes goes down without scoring a single chuckle.

Pooh's 3 Strikes aims a good deal higher in concept than, say, your average booty movie - but the crude, witless jokes are on exactly that level.

Designed for a lowest-common-denominator audience segment.

It would be easier to forgive some of the film's excesses, however, if it were actually funny.

Has far more than three strikes against it.

This one used up all three of 'em in the first few minutes.

3 Strikes is depressing and grim, but not in any useful or interesting way.

There's absolutely no momentum -- comedic or otherwise -- to propel the film or hold one's interest in what transpires.