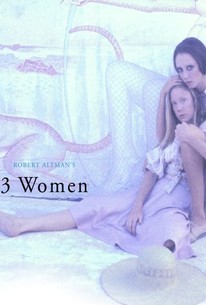 Critics Consensus: 3 Women is a strange, eerie portrait of late-'70s womanhood that upends and then defies all expectations.

Critics Consensus: 3 Women is a strange, eerie portrait of late-'70s womanhood that upends and then defies all expectations.

Critic Consensus: 3 Women is a strange, eerie portrait of late-'70s womanhood that upends and then defies all expectations.

Robert Altman's Three Women takes a surreal, improvisational and rather eerie look at the lives of three women in a western desert town. The plot centers around the youngest of the women, Pinky (Sissy Spacek), an eccentric, withdrawn woman trying to begin a new life. She finds work as an attendant at a hot springs spa catering to the elderly and infirm. There she befriends her co-worker Millie (Shelley Duvall), an equally strange but more outgoing woman; the two bond, and are soon sharing an apartment. Pinky becomes increasingly dependent on Millie, eventually adopting aspects of her personality and appearance. This obsessive attachment is threatened when Pinky discovers Millie with a man -- Edgar (Robert Fortier), the macho, faux-cowboy husband of local artist Willie (Janice Rule), the last of the title's three women. Pinky's subsequent, desperate actions precipitate the film's enigmatic conclusion, involving an unexpected series of confrontations and role reversals amongst the three women. This story tends to take a backseat to the elliptical, spooky imagery, particularly the desert landscapes, and the quirky performances -- not surprising, given that the film was reportedly shot without a full screenplay and inspired by Altman's own dreams. ~ Judd Blaise, Rovi

The result is remarkable -- a semi-lucid, feverish tale of female relationships that disintegrates into a kind of woozy, oppressive madness.

Throughout, Duvall is brilliant: she coins a brand-new caricature of the confident yet clueless single female, then suggests a real person underneath.

The film is rich in brilliant oddities and juxtapositions, never more so than when Duvall and Spacek are encompassed in the same frame.

Like a dream, it is most mysterious and allusive when it appears to be most precise and direct, when its images are of the recognizable world unretouched (as happens in the film from time to time) by camera filters or lab technicians.

An incisive portrait of psychological alienation.

I have seen it many times, been through it twice in shot-by-shot analysis, and yet it always seems to be happening as I watch it. Recurring dreams are like that.

There are all sorts of details that might Mean Something, that you could amuse yourself with on rainy evenings, but I would rather give credit to the three actresses, who were superb, than worry about what was going on in the director's head.

So what does this film have to say to women? Not a whole lot. And surely nothing new.

These three women form an interesting triptych that, following Nashville and MASH, make Robert Altman one of the more current and personal filmmakers of American cinema. [Full Review in Spanish]

One of Altman's most atmospheric films.

2nd time watching this, still can't claim to understand the ending, but wow, such a good movie. Really enjoyed the relationship between these two women. The third in the end is too seldom in the movie to have any real impact. I also lean towards the theory that Millie and Pinkie are the same person, but hard to say.

'She tries not to shatter, kaleidoscope style Personality changes behind her red smile Every new problem brings a stranger inside Heplessly forcing one more new disguise.'

When "3 Women" came out, I was 11. I have no memory of its release. Even at that young age, I paid careful attention to film. If "3 Women" had been released in the suburbs of New York City, where I lived, I would have known. I also would have known about it if it had received Oscar nominations. It received none. I became aware of "3 Women" in my 20s. When I was about 25 and in graduate school, I rented it. (Probably on videotape!) I remember thinking that it was one of the weirdest films I had ever seen. Not weird in an engaging way -- weird in an off-putting way. None of it made any sense to me. I would have given it a 2 or 3 rating. But I never forgot the film. Something about it stayed with me. Many times I felt the desire to try watching it again. Would it make more sense to me now? Would the older me see it in a new way? Would I ever figure out what Robert Altman was trying to do with it? Something kept drawing me back. It was a code I wanted to crack. After about five years on my Netflix queue, it finally came to the top. Twenty years later, I finally got my chance to view this enigma again. I'm happy to report that it was worth the wait. The older me did see it differently. I don't think it's a great film, but I certainly understand and appreciate what Altman was trying to do. Even with its flaws, which are considerable, I now feel that "3 Women" deserves its status as a classic of the American avant-garde. Not all the avant-garde classics are European! (But most are.) More details on plot later....