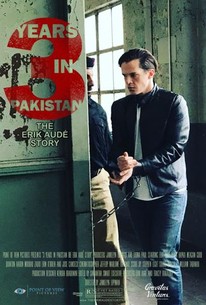 3 Years in Pakistan: The Erik Audé Story is a feature length documentary about an American actor, who was sent to death row in one of the most dangerous prisons in Pakistan for a crime he didn't commit. Proven innocent he was forced with the choice of pride vs. freedom. While on a business trip Erik Audé was sent to Pakistan where he was arrested at Islamabad International Airport when they found 3.6 kilos of opium hidden in the lining of his suitcase. He was sent to remand where he was beaten, electrocuted and water tortured for the next three days. He maintained his innocence and refused to cop a plea even though it meant less jail time. Once confirmed that Erik did this unknowingly, he was offered a deal for a guilty plea. When Erik was asked the question: "what's worth more to you, your pride or your freedom?" Erik choose pride. Erik endured 3 years in Adiala Central Jail in Rawalpindi, one of the most dangerous prisons in the world, where he was forced to fight every day to survive. Due to a stroke of luck through his relationship with Casting Director Joey Paul Jensen and the help of former New Mexico Governor Bill Richardson, Erik was released in December of 2004. Today, Erik is a working actor, stunt coordinator and professional poker player, a skill he learned from the 1986 Pan Am hijackers while in prison. This film features actors Quinton Aaron (The Blindside), Meagan Good (Think Like A Man), and former Major League Baseball player, Jose Canseco.

Critic Reviews for 3 Years in Pakistan: The Erik Audé Story

Occupies a tone-deaf void somewhere between investigative documentary and movie of the week.

Tthis is an interesting little film in as far as it goes, and for those unfamiliar with Erik's story it has a perfect Hollywood twist at the end.

Audience Reviews for 3 Years in Pakistan: The Erik Audé Story

There are no featured audience reviews yet. Click the link below to see what others say about 3 Years in Pakistan: The Erik Audé Story!