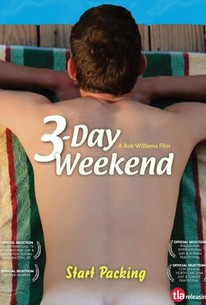 New connections form and longtime relationships falter when a long-term gay couple and their two gay friends meet up for a three-day weekend in the company of a few new friends. Ever year, committed gay couple Simon and Jason meet up with their old friend Cooper and his boy du jour for a relaxing weekend away from the demands of their regular lives. This year, they've decided to add some spice to their traditional weekend by making a new rule: Everyone involved is to bring a single friend along for the annual getaway. As the weekend gets underway, the presence of these newcomers - including a randy former college roommate, a perpetually naked yoga instructor, an irascible co-worker, and high-class rent boy - stir up more tension than Jason and his old friends could have ever anticipated. Seventy-two hours and multiple sexual couplings later, it's readily apparent that their plans to shake things up have succeeded, but at what cost?

Stephen Twardokus
as Ace
View All

There are no critic reviews yet for 3-Day Weekend. Keep checking Rotten Tomatoes for updates!

There are no featured audience reviews yet. Click the link below to see what others say about 3-Day Weekend!