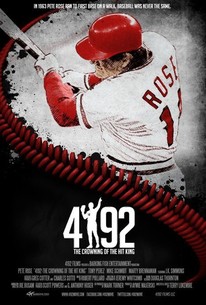 On the evening of September 11, 1985, before a sellout crowd of 52,000 at Riverfront Stadium in Cincinnati, Pete Rose was poised to collect hit number 4,192 of his long brilliant career, passing Ty Cobb as the all-time career hits leader. Rose came up to bat in the first inning against the San Diego Padres Eric Show and on the fourth pitch lined a clean single to left center. As he reached first base, thousands of camera flash bulbs fired off rapidly, his teammates mobbed him, fireworks exploded above the stadium and the crowd overwhelmed him with an unprecedented nine-minute standing ovation. From Pete's first at bat to that immortal September evening where history was made, "4192" traces the Hit King's rise as one of baseball's greatest and most controversial stars. Pete Rose was perhaps the most versatile player in Major League Baseball history, having played five hundred or more games at five different positions in his twenty-four year career. He holds numerous major league records including most hits, most games played and most at-bats. He was the 1963 NL Rookie of the Year, the 1973 NL MVP, 1975 World Series MVP, won two gold gloves, three World Series rings, and appeared in seventeen All-Star games among other notable achievements. --© Director

Mike Schmidt
as As Himself

Pete Rose
as As Himself

Tony Perez
as As Himself
View All

Critic Reviews for 4192: The Crowning Of The Hit King

Narrated by J.K. Simmons, the film is a spectacular highlights reel of its subject's staggering achievements on the diamond...

Audience Reviews for 4192: The Crowning Of The Hit King

There are no featured audience reviews yet. Click the link below to see what others say about 4192: The Crowning Of The Hit King!

4192: The Crowning Of The Hit King Quotes