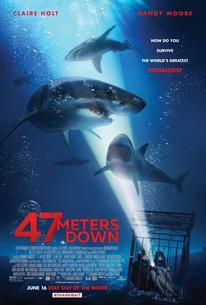 Critics Consensus: 47 Meters Down doesn't take its terrifying premise quite as far as it should, but its toothy antagonists still offer a few thrills for less demanding genre enthusiasts.

Critics Consensus: 47 Meters Down doesn't take its terrifying premise quite as far as it should, but its toothy antagonists still offer a few thrills for less demanding genre enthusiasts.

Critic Consensus: 47 Meters Down doesn't take its terrifying premise quite as far as it should, but its toothy antagonists still offer a few thrills for less demanding genre enthusiasts.

Two sisters vacationing in Mexico become trapped in a shark cage on the ocean floor. As their oxygen starts to run out and with great white sharks circling them, the sisters must find a way to get to the surface alive.

News & Interviews for 47 Meters Down

How Family-Friendly Are ‘Til Death Do Us Part and Our Souls At Night
New On DVD This Week: Transformers: The Last Knight, 47 Meters Down, and More
Watch Online: The Walking Dead, Bojack Horseman, Dirty Dancing, and More on Netflix and Amazon Prime

View All 47 Meters Down News

Critic Reviews for 47 Meters Down

But on its own B-movie terms 47 Meters Down works just fine, not wearing out its welcome thanks to its quick set-up, rapid pacing and brief running time.

It's not a great film but, once the preliminary scenes on terra firma are over and we descend to a place we don't belong, it delivers an hour or so of sustained physical and psychological terror.

British director Johannes Roberts makes decent use of the murk (the film was largely shot in a tank in London) and the sisterhood theme gives the film a broader appeal than, say, The Shallows.

A movie to be laughed at, not with, but there's pure popcorn pleasure to be found in its unapologetic schlock.

After the success last year of The Shallows, here's another schlocky but brazenly entertaining thriller pitting American woman against homicidal shark in Mexico.

A fiendishly effective holiday-gone-wrong thriller that's better at cranking up the agoraphobic action than fleshing out its characters.

The film moves at a steady, scary pace with plenty of "uh-oh" moments to keep you on your toes.

Sure enough, chains break, and the result leads to the kind of tense and bloody moments Shark Week fans adore.

An underwater exploitation b-movie that plays up on the archetype of the shy character who finds hidden reserves of courage. But, and there will be no spoilers here, it makes just enough unexpected choices along the way to keep things interesting.

I found 47 Meters Down to be intense, well constructed, and a good time at the movies.

To the film's credit, the cinematography is crystal clear and the environments appear entirely believable.

Audience Reviews for 47 Meters Down

Incredibly intense, 47 Meters Down is a frightening thriller that gives Jaws a run for its money. While on vacation in Mexico two sisters go on a dive in a shark cage, but when an accident causes the cage to break free from its moorings the girls end up trapped at the bottom of the ocean with limited air and surrounded by sharks. Mandy Moore and Claire Holt both give strong performances; especially given that they're underwater and in full diving gear for most of the film. Also, the script does a pretty good job at having the girls work through their problems and attempt to find rescue. And the shark attacks (though not very realistic) are terrifying, and are made more so by a remarkably powerful score that heightens the tension and suspense. 47 Meters Down is a fresh and exciting horror film that delivers some bone-chilling scares.

A snorefest of a shark movie. Not nearly enough shark or blood!