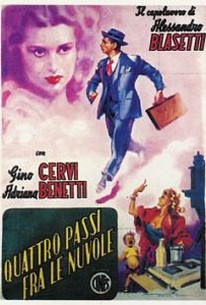 Originally released in 1942, Four Steps in the Clouds (Quattro Passi fra le Nuvole) was a major stepping stone in the starring career of Gino Cervi. The story begins as young unwed mother-to-be Maria (Adriana Benetti) desperately casts about for a means of avoiding disgrace. Making the acquaintance of good-natured Paolo Bianchi (Cervi), Maria persuades him to pose as her husband and meet her family. Immediately ingratiating himself with Maria's parents, Paolo plays his part so well that only a completely unforeseen disaster could spoil the charade. And when that disaster inevitably arrives, it is Paolo who comes to the rescue -- simply by telling the truth for the first time in the picture! Four Steps in the Clouds was superbly remade by Alfonso Arau in 1995 as A Walk in the Clouds, with Keanu Reeves in the Gino Cervi role. ~ Hal Erickson, Rovi

There are no critic reviews yet for 4 passi fra le nuvole (Four Steps in the Clouds). Keep checking Rotten Tomatoes for updates!

There are no featured reviews for 4 passi fra le nuvole (Four Steps in the Clouds) at this time.