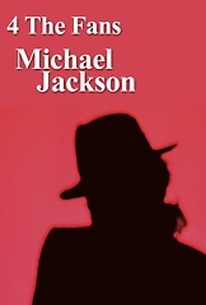 4 THE FANS is a compilation of very rare and exclusive private moments with Michael Jackson. From an early interview with Jackie and Michael aged 12 through to Michael with his brothers back-stage pillow fighting in the hotel rooms they stayed at while on tour. Includes footage of Michael in his early 20's introducing his pet llama Louie, La Toya as only a sister can be with her brother and Joe Jackson talking about the band, the rules of the road, education and their label Motown. This unique program will be extremely compelling and interesting to many of Michael's fans.

There are no critic reviews yet for 4 the Fans: Michael Jackson. Keep checking Rotten Tomatoes for updates!

There are no featured reviews for 4 the Fans: Michael Jackson at this time.