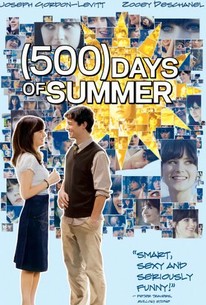 Joseph Gordon-Levitt and Zooey Deschanel star in director Marc Webb's wry, nonlinear romantic comedy about a man who falls head over heels for a woman who doesn't believe in love. Tom (Gordon-Levitt) is an aspiring architect who currently earns his living as a greeting card writer. Upon encountering his boss' beautiful new secretary, Summer (Deschanel), Tom discovers that the pair have plenty in common despite the fact that she's seemingly out of his league; for starters, they both love the Smiths, and they're both fans of surrealist artist Magritte. Before long Tom is smitten. All he can think about is Summer. Tom believes deeply in the concept of soul mates, and he's finally found his. Unfortunately for Tom, Summer sees true love as the stuff of fairy tales, and isn't looking for romance. Undaunted and undeterred by his breezy lover's casual stance on relationships, Tom summons all of his might and courage to pursue Summer and convince her that their love is real. ~ Jason Buchanan, Rovi

Minka Kelly
as Girl at Interview

Natalie Boren
as Another Partygoer

Gregory A. Thompson
as Minister

News & Interviews for 500 Days of Summer

View All 500 Days of Summer News

Critic Reviews for 500 Days of Summer

This is a film which tries so hard to be fresh and different it loses sight of the bigger picture, is just kind of empty somehow, and rather beefs up the 'rom' and the heartache at the expense of the 'com.'

The principals perform their roles nicely, but there really isn't much for them to do. Undoubtedly, the age gap has influenced my negative response.

What makes this movie so seamless is the spot-on performances of the two lead actors and the very relatable story of what happens when love--and life--happens.

An unpredictable, immensely satisfying experience, much like love itself.

(500) Days is a funny, seductive, and surprisingly honest dramatization of the ways we snooker ourselves into incompatible love.

The kind of film that comes around every 10 years. A true, funny kind of love story that's not a love story at the same time.

It has no great story to tell, other than recounting the path of a relationship from start to end and the various emotions that occur within it-and it is terrific every step of the way. And utterly relatable.

Sardonic, quirky, clever: these filmmakers really know the way to my heart.

Who really understands this thing we call love?

Audience Reviews for 500 Days of Summer

Despite its clever idea, this unfunny romantic comedy full of clichés is centered on an annoying, uninteresting couple who never convinces us of what they feel - and it is almost impossible to understand how anyone would fall in love with Zooey Deschanel's detestable character.

500 Days is different love story, and worth watching. I would have rated it higher, but I found the non-linear presentation confusing. It felt like taking Shakespeare in class and having to read it a couple of times to figure it out.

I usually hate romantic comedies for the sheer fact that they always use the same, recycled ideas over and over again, despite changing the storyline slightly and changing the title. I was pleasantly surprised by 500 Days of Summer, I didn't expect much from the film, and I really thought it was going to be a clichéd rom com; however I was surprised that though it had traditional genre elements, it completely reinvented the style, and it took a very different route than your traditional genre film. The story is very good, as well as the acting and I enjoyed the chemistry of the two lead actors, Joseph Gordon-Levitt and Zooey Deschanel, whom are well suited for the parts they play. The vibe of the film is different, refreshing and it makes for one of the best romantic comedies that I have seen. This was a pleasant surprise and I thought it was a highly entertaining picture from start to finish, and it's one of the few genre films where we the ideas just connect with the viewer. For me, what really stood out for me were the two lead performances, which I thought were terrific and the direction by director Marc Webb keeps you involved from start to finish. Sure, there could have been some slight improvement here and there, but overall this is a superbly well crafted picture that definitely brings a breath of fresh air to the romantic comedy genre. Add to that a few dramatic elements, and you have a movie that is thoroughly engaging and above all worth seeing for viewers that are skeptical about these sorts of films. 500 Days of Summer is an accomplished film, one that is well acted and directed and it's a thoroughly engaging picture from start to finish.

Joseph Gordon-Levitt and Zoey Deschanel do a wonderful job in this off beat completely different romantic comedy. One thats strikes more to the reality of the complicated way love works than many others in the genre.