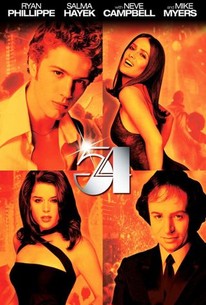 Critics Consensus: Robbed of its integral LGBTQ themes, 54 is a compromised and disjointed glance at the glory days of disco.

Critics Consensus: Robbed of its integral LGBTQ themes, 54 is a compromised and disjointed glance at the glory days of disco.

Critic Consensus: Robbed of its integral LGBTQ themes, 54 is a compromised and disjointed glance at the glory days of disco.

Mark Christopher wrote and directed this look back at the Disco Era when the popular Studio 54 was at its apogee in the late '70s. With obvious comparisons to Paul Thomas Anderson's Boogie Nights (1997) and Whit Stillman's The Last Days of Disco (1998), the story introduces working-class 19-year-old Irish-American Shane O'Shea (Ryan Phillippe), who has lived with his father and siblings since the death of his mother when he was 12. Shane quickly rises from busboy to bartender at Studio 54, co-owned and managed in a paternal manner by entrepreneur Steve Rubell (Mike Myers). Busboy Greg Randazzo (Breckin Meyer) and Greg's wife, Anita (Salma Hayek), the club's coat check girl, become Shane's new friends, and he encounters the possibility of romance with soap star Julie Black (Neve Campbell). The story spans the summer of 1979 until the decline of Studio 54 a year later with IRS investigations, followed by the arrest and jailing of Rubell. Costumes by Ellen Lutter capture the glitter and glam-glitz of the period. ~ Bhob Stewart, Rovi

Daniel Lapaine
as Marc the Doorman

Thelma Houston
as Herself

Elio Fiorucci
as Himself

Drake Thorens
as Man on Horseback

Jason Fruitman
as Busboy No. 1

Ultra Nate
as Stars on 54

Amber
as Stars on 54

Jocelyn Enriquez
as Stars on 54
View All

A more critical and resonant Hollywood movie about the glorious disco culture screams to be made.

Myers exploits every vicious, self-hating line that comes his way.

The triteness comes thick and fast.

It's a flat, clumsy piece of filmmaking.

Decadence has rarely looked so pathetic, lethargic and dispiriting as it does in this listless film.

The studio that released the film Miramax, ordered 40 minutes removed from the film and 30 minutes worth of reshoots. The result not only sanitized the film, but fundamentally changed the characters.

A soapy, fictionalized chronicle of the fast times at 54.

The most affecting moments are shards of sexual behavior... that existed only on the samizdat VHS, the degraded quality suggesting ghostly remnants of film's scissoring [and] the long-dead behaviors on-screen, debauchery and gaucherie alike.

[The Director's Cut] is out and proud, not at all shying away from the sexual aggression of Phillippe's character as he calmly removes his clothes for any gender.

The director's cut still has a pacing that lags during the second act, and now that the film's about the love triangle, the scenes with Julie don't really add anything to the overall story. That being said, it deserves a second chance in its new life.

...comes off like a high-budget cautionary tale, concerned that if it shows anything attractive about Studio 54, some young and innocent viewer might be corrupted...

It is hard to believe that they managed to make a movie about glamour and music (with a great soundtrack) into something so uninteresting and vapid - to the point that ask ourselves why we should care or why these poorly-developed characters would even consider each other friends. (Theatrical version) (2.5/5) Mark Christopher's newly-restored original cut is remarkably different from the 1998 theatrical version, especially with regard to what it wants to say. (Director's Cut, full review on filmotrope. com) (4/5)

Good music and an excellent Mike Myers performance are the highlights of this movie but neither Phillippe nor Campbell can act so the film has two empty spots at its center.