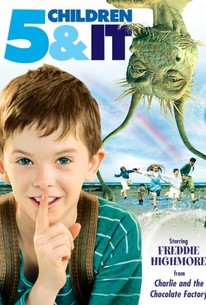 5 Children and It Photos

Five brothers and sisters find their uncle has a big surprise hidden in his estate in this comic fantasy for the whole family. Not long after World War I breaks out, five children -- Cyril (Jonathan Bailey), Robert (Freddie Highmore), Anthea (Jessica Claridge), Jane (Poppy Rogers), and Lamb -- find themselves in dangerous circumstances when their father is sent off to fight, and their mother volunteers to be a field nurse. Unable to care for themselves, the children are sent to the country, where they stay with their eccentric uncle Albert (Kenneth Branagh) and his ill-tempered son, Horace (Alexander Pownall), in Albert's ramshackle home. Uncle Albert has more than a few rules about what the children can and cannot do, but his strictest edict is that the children must never go into his greenhouse. Of course, the children's curiosity gets the better of them, and they sneak in to discover their uncle's big secret -- the building is home to Psammead (voice of Eddie Izzard), an ugly and often bad-mannered "sand fairy" who has the ability to grant wishes. However, the kids discover that Psammead's wishes only last for 24 hours, and that they have a strange habit of backfiring on their beneficiaries. 5 Children & It was based on the classic book for children by E. Nesbit; Psammead was realized onscreen with a puppet created by Jim Henson's celebrated Creature Shop. ~ Mark Deming, Rovi

Eddie Izzard
as Voice of `It'

Alexander Pownall
as Horace
View All

Critic Reviews for 5 Children and It

Its eccentric charms and light humor will most certainly win over anyone looking for a brisk family adventure.

Live this up, a wholesome family film this delightful doesn't come by very often.

Audience Reviews for 5 Children and It

CAST: Kenneth Branagh, Zoë Wanamaker, Freddie Highmore, Eddie Izzard, Jonathan Bailey, Jessica Claridge, Poppy Rogers, Tara Fitzgerald, Alex Jennings, John Sessions, Norman Wisdom, Duncan Preston DIRECTED BY: John Stephenson SUMMARY: While their father is fighting on the front lines, five children find themselves bunking at their uncle's estate, where they befriend a fairy called It (voiced by the hilarious Eddie Izzard), who helps them uncover the mysteries of the large mansion in which they now live. This high-spirited tale finds It bringing joy, laughter and luck to the kids' lives, as the grown-ups contend with the painfully adult challenges of living in a time of war. MY THOUGHTS: "This is a movie for the kids. My niece's and nephew liked it a lot, I on the other hand thought it was a bit boring. But it had it's moments of humor. Had a some what sad story, and had a good lesson about not being selfish. But still much more a film for the kids. Good cast, and a good young cast as well."

5 Children and It Quotes