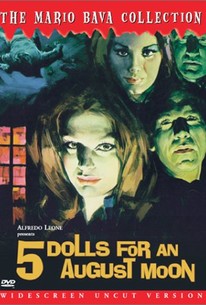 Legendary horror director Mario Bava did not want to make this standard thriller, and it certainly bears the lackadaisical mark of a contractual-obligation film. The plot is yet another variant on the Ten Little Indians story, with an inventor taking a group of investors to an island, where they are murdered one by one by an unseen killer. There are picturesque beach scenes and some well-composed images of bodies hanging in a meat locker, but it has all been done before, and better. The visuals are stylish and the production design is sleek, but the familiar storyline drags and the film never reaches the delirious frenzy of such Bava classics as Antefatto despite the best efforts of a cast including Edwige Fenech, Renato Rossini, and William Berger. ~ Robert Firsching, Rovi

Flawed as it is, for those with a fondness for Sixties excess, it's a treat.

A flawed but enjoyable thriller that at only 80 minutes doesn't outstay its welcome.

Mario Bava has infused Five Dolls for an August Moon with exactly the sort of nonsensical feel that one has come to expect from the filmmaker...

Bava apparently took on this movie at the last second and didn't like the script, but still managed to make one of his most interesting, atypical films.

I commited to this film as a Bava fan, but I would not subject anyone other then another Bava fan to sitting through it. Aside from a great location, sets, costumes and music...there is not a whole lot of positive things to say about this film. Not sure if it was the bad writing, editing, acting or a combination of all three...but this was very hard to sit through.

With an offhand plot, lines and character -- so chintzy they don't feel like a structure underneath anything -- this seems like a work made out of pure formalistic genius. And methodical genius: every long take is used for as many camera angles as possible or the character gets to traverse the frame in like 10 ways, and NONE of these long takes are economical cliches. A cold world, empty of conscience and full of rich colors and vivid lines and curves. The characters have about as much humanity as figure shapes, and hang together civilly.

Art direction and cinematography are as distinctive as any of Bava's other giallo films of the period, but the garbled script to what is essentially little more than a standard body-count movie really lets this one down. After a plodding and talky start, the film disintegrates into a total mess. Bava pulls off the odd visual flourish, but such scenes never gel together. Still, the mesmeric use of zooms, focus pulls, and tracking shots and the stylish use of colour ensures that, from an entirely aesthetic perspective, this film never becomes boring, and as an auteur piece, is well worth a watch. Now, if only I could work out what the hell happened in it...

About 40 minutes into 5 Dolls For an August Moon, one of the characters says something about everyone waiting for something to happen and it never does. That pretty much sums up this movie. It's got none of the gore or sleaze that later Bava movies are known for, but at the same time it's got none of the style of his earlier works either. And that twist at the end isn't even really worth it, but the goofy score and the saucy Italian women save this one from being a total waste.