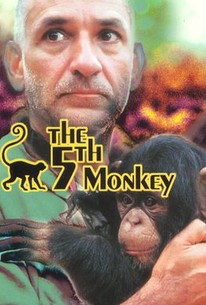 Ben Kingsley headlines this thoughtful adventure that was filmed on location in Brazil. The story centers on Cunda, a poor hunter who makes his meager living killing snakes. One day, he runs across four chimpanzees. The hunter is elated, for he hopes that selling them in the Big City will net him enough money to pay the dowry of his beloved Maria, a widow who lives in his village. His journey is long and arduous. At one point he ends up forced to work in a remote mining camp; at another he gets captured by military slavers. He and a beautiful Indian girl manage to escape from the latter and with the chimps make it to the city. But things don't go well there. More adventures ensue, and with each one, Cunda ponders humankind's true place in the natural world.

Messias Santos
as Guard at Miner's

Antonio Pitanga
as Drunk at the Party

Gilson Moura
as Guard at Jail

Milton Gonçalves
as Judge
View All

Critic Reviews for The 5th Monkey

There are no critic reviews yet for The 5th Monkey. Keep checking Rotten Tomatoes for updates!

There are no featured reviews for The 5th Monkey at this time.