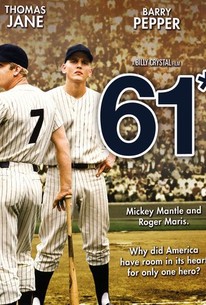 Noted baseball fan Billy Crystal directed this made-for-cable drama set in the summer of 1961, as two of the strongest hitters in the major leagues, Mickey Mantle (Thomas Jane) and Roger Maris (Barry Pepper), find themselves neck and neck in a battle to break Babe Ruth's long-standing record for most home runs in a season. Both men were playing for the New York Yankees at the time, and as the two men came within grasping distance of Ruth's record, their loyalty as friends and teammates was put to the ultimate test. 61 also features Richard Masur, Bruce McGill, Anthony Michael Hall, and Renee Taylor; the scenes set in Yankee Stadium were filmed at Michigan's Tiger Stadium, shortly after the Detroit Tigers shuttered the venerable playing field and relocated to a newer facility.

Randall Godwin
as Fan No. 1

Dell Yount
as Writer No. 1

Connor Trinneer
as Writer No. 2

This film is about more than a broken record. It's about a broken heart. Watch it, and yours may break, too.

The beauty of 61, the Billy Crystal film for HBO, is that it early on makes a few dangerous missteps and corrects them quickly, all the while benefiting from a story as riveting and freshly modern as any sports story ever.

What begins as a lively, vibrant evocation of one of baseball's greatest seasons ends as a frustratingly conventional tale of sports heroism, a sort of upscale movie-of-the-week for the Classic Sports Network crowd.

Mr. Jane, as Mantle, nails both the player's movie-star charisma and his painful, self-destructive streak.

The largest grace note is the core of the film: that's the affection and bond between Mantle and Maris, men so different in temperament, so similar in culture.

Featured here are Barry Pepper as Maris and Thomas Jane as Mantle, actors as persuasive on the field as off.

I enjoyed 61*, but then again, I'm a longtime fan of baseball.

Crystal delivers a nice looking sentimental television drama geared for the fan who looks to baseball as if it were a religion.

A great baseball movie solidly directed by Billy Crystal. You can tell he's a Yankee fan, but also does not hesitate from showing the warts on some of his idols.

One of the best telemovies I've ever seen...simply sensational

Baseball drama from director Billy Crystal has the graceful arc of a well-hit ball.

Being a huge fan of baseball, but someone who was born much later than the 1961 Home run race, made 61* a real joy of a viewing experience for me. Not only is it a fascinating look at what it's like playing baseball every day for 162 games a year, but it provided perspective on the interesting relationship that players have with fans. I think even more so than the race itself, it was that dynamic that sold me on 61's story. I think sometimes people forget that athletes and celebrities are humans too. Heck, even I find myself getting caught up in it all sometimes at these events and forget that these athletes have families and lives just like the rest of us. Sure, I loved watching the film explore Mickey Mantle and Roger Maris' power on the field, but it was fascinating to watch them go about their lives outside the diamond in an entirely different manner. I'm not sure how much of this movie is heightened or "Hollywood-ized", but that didn't really play into the determining factor for me. Personally, I feel as though 61* rivals some of the great sports movies in balancing on and off the field issues. However, the film isn't without its flaws. 61* is a 2001 HBO movie made for TV, and I think that showed. The CGI, or lack thereof, was very noticeable, especially in the moments that needed to hit well. For example, I don't really need to see a slow-motion incredibly fake baseball coming towards my face before Roger smacks it out of the park. And I feel as though this movie had a tough time with the really big emotional and dramatic moments. Don't get me wrong, I like both Barry Pepper and Thomas Jane in the lead roles but I don't think their performances come close to Kevin Costner in Field of Dreams or Robert Redford in The Natural. Not that they necessarily need to, but when the games are in their biggest moments, it felt like a TV production. But as I said, this movie holds up incredibly well because of its content matter, especially now that baseball is desperately needing another HR race for its popularity. Plus, if we wipe away the guys who broke the record using steroids, Maris would still hold it with 61. It's actually remarkable what Maris was able to do at that particular stage of baseball, and considering he was never really able to recapture that power. So just for loving the game of baseball alone, 61* is worth a look. 7.7/10

"Stick to what you know" is advice often rendered to art students and for Mr. Billy Crystal of New York City that apparently is just the ticket as he produced and directed this affectionate nod to American baseball, and most particularly the homerun race between Yankees Mickey Mantle (Thomas Jane) and Roger Maris (Barry Pepper). All in all the work is a nice memento of times gone by, such as when baseball was #1 in America.

What a wonderful movie! I was all "Awwww!" and "Noooo!" and "Yaaaay!" Full of exciting sports, devastating injuries, and heartwarming camaraderie. Barry Pepper is hella sexy. I love the scene the night before the 61st, during which Maris talks to his wife in bed and gives her the the softest, most tender kiss. Waaaaah!