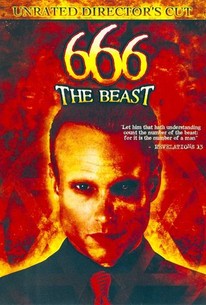 This chilling sequel to "666: The Child" follows in the cloven hooves of its predecessor. This time around, the devil's spawn has grown up to become a respectable captain of industry (Chad Mathews)...until the satanic evil overtakes him again. Things turn into an epic good-vs.-evil battle when he faces the second coming of the son of God. Written and directed by Nick Everhart. Makinna Ridgway, Alma Saraci, Collin Brock, Amol Shah, Stephen Blackehart.

Critic Reviews for 666: The Beast

There are no critic reviews yet for 666: The Beast. Keep checking Rotten Tomatoes for updates!

Audience Reviews for 666: The Beast

There are no featured audience reviews yet. Click the link below to see what others say about 666: The Beast!