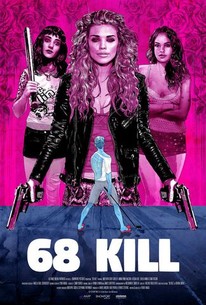 Scraping by flushing septic systems is not Chip's vision of a perfect life. But he's a simple guy and he's got a great girlfriend in Liza. Sure, she supplements their income with a sugar daddy, but every relationship has it's own complexities. When Liza suggests that they relieve her sleazy benefactor of a stack of cash, Chip begins to see a side of her he never knew existed...or never wanted to admit. Now he's got a gun in his hand, a girl in his trunk and less than 24 hours to figure his way out of this mess. A punk-rock romantic comedy for our jagged times.

Walker Babington
as The Neighbor

I'm too frustrated by the stuff that keeps me ill at ease to give it a pass, the uglier aspects of this hellacious road trip into madness rubbing me too far the wrong way.

It's cheap and trashy and tasteless, but it's not unfun, and there's a pleasing measure of low-budget craft on display.

The kind of piece that needs to move 100MPH from first scene to last for you to overlook its flaws. It slows down for too long to recommend the ride.

Those who pick through every motion picture searching for the "problematic" will want to steer clear of "68 Kill." But fans of wicked women may have a new cult favorite.

Nearly a de facto remake of After Hours, writer-director Trent Haaga's lively trailer-park thriller 68 Kill keeps the hostility and loses the self-deprecation, which turns it into an example of misogyny rather than an examination of it.

Nuttier than a bakery full of fruitcakes and sleazier than a cheap strip club, "68 Kill" is a proudly morbid heist movie that wallows in bad taste and still comes off as absurdly funny.

68 Kill is a horror-comedy-action thrill ride, one that goes for insane and then amps up the volume on that way past 11.

69 Kill won't bore you, and at least it tries something new, conceptually, but the poor execution will most likely doom it to obscurity.

[68 Kill is] so obviously written and directed by a man (well, two men including the novel) that it's laughable to even suggest there's any depth to it, let alone a subversion of gender roles.

'68 Kill' is a gritty, insane, violent, and twisted ride that doesn't let up until it's over.

68 Kill offers thrills, chills and inventive kills by the boot-load.

All it does well is numb the senses and inspire an appreciation for the art of the rewrite.

When it comes to Redneck Schlock, Rob Zombie is the undisputed king. 68 Kill is not at that level, but it's very watchable, if you're up for that sort of thing.