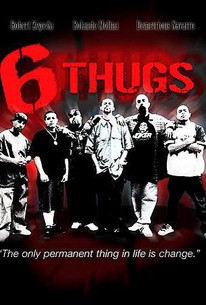 Six of the most notorious gangsters in the city commit a series of crimes that strike fear into the hearts of their victims and enemies alike. Later, when the leader of the gang commands his men to rape a teenage girl, two of the thugs refuse. Infuriated, the leader orders a hit on the men who dared defy him.

Robert Zepeda
as Trusty
View All

There are no critic reviews yet for 6 Thugs. Keep checking Rotten Tomatoes for updates!

There are no featured reviews for 6 Thugs at this time.