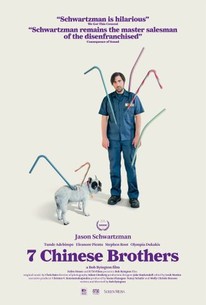 A man unaccustomed to telling the truth learns to at least describe it. Larry (Jason Schwartzman) is an unqualified, unemployable, inebriated prankster who rides a tide of booze onto the glorious shores of an undiscriminating Quick-Lube. Taking a part-time job vacuuming and washing windshields, Larry finds himself mixed up with hostile co-workers and unsatisfied customers, while also finding himself smitten with his lovely boss, Lupe Torrez (Eleanore Pienta). Will Larry keep it together long enough to win the girl, provide for man's best friend (his dog Arrow), and do his grandmother (Olympia Dukakis) proud? (C) Official Facebook

Jennifer Prediger
as Woman with Glasses

The film never allows the audience to truly get to know any of the characters in Larry's world, a world in which their uniform shirts emblazoned with company logos and their first names serve as reminders of their lot in life.

By widening his soulful puppy eyes - matched only, quite eerily, by those of his French bulldog in real life, Arrow - Schwartzman successfully dares audiences to care.

Schwartzman ... gives Larry enough humanity and a modicum of personal growth that you keep coming back for more.

Writer-director Bob Byington showed potential as a social satirist with his provocative 2008 indie RSO (Registered Sex Offender), but this slacker comedy lacks any such venom.

With 7 Chinese Brothers, Austin-based filmmaker Bob Byington has made his most accessible film yet.

7 Chinese Brothers is so slight it risks evaporating on contact.

A very funny, resonant and, most importantly, self-aware film that allows a grade-A performer to show off his deadpan chops.

7 Chinese Brothers has an abundance of half-hearted slacker charm that it is hard to fault.

"7 Chinese Brothers," modest and unassuming, wins us over too, even though I can't figure out what the R.E.M. song has to do with the movie. Plus, it looks like Byington could only afford 2 Chinese brothers at most.

It's a small film, with some great performances and one irrefutably cute dog.

The project is more of a sketchy workshop than a fleshed-out feature, but at least Schwartzman's freewheeling banter provides some modest amusement.

Byington's words elucubrated by Schwartzman's rich varieties of mutter and mumble and banter are one of the genuine moviegoing treasures of a not-completely-half-bad year for emphatically idiosyncratic comedy. I laughed. A lot.

There are no featured audience reviews yet. Click the link below to see what others say about 7 Chinese Brothers!