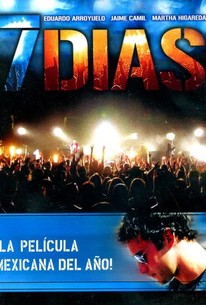 A guy on the lower rungs of the music business shoots for the moon by bringing one of the biggest bands in the world to his hometown in this drama. Claudio (Eduardo Arroyuelo) is a music promoter who is tired of living in the shadow of his successful brother, who came to dominate the business before his untimely death. Claudio has decided he wants to stage a concert that will earn him a reputation all his own, and pulling in every favor he has, he attempts to pull off a major coup -- bringing U2 to Mexico City for a series of concerts. However, he'll need nearly half a million dollars in seed money to make the shows a reality, and coming up with that kind of cash will require little short of a miracle. 7 Días also stars Julio Bracho, Jaime Camil, and Martha Higareda.

Lacks the emotional anchor of other Mexican cinema.

Has no sense of its own ridiculousness.

Bono need not appear in a film for his massive-sized ego to be felt.

Suffers from a seesawing tone, a plot that's less wacky than loony, and a taciturn hero so disagreeable, self-centered, brusque and ungrateful that you're rooting for him to lose.

There's virtually no story in the movie, at least none that isn't utterly, completely predictable.

U2-focused film isn't even better than the real thing. Not by a long shot.

U2, notoriously tight with the rights to their music and image, were reportedly so impressed by the script that they allowed their music and some concert footage to be used for very cheap. They got gypped.

[Arroyuelo and Camil] are enjoyable, so is Martha Higareda as Claudio's patient girlfriend, though the coming of the band is treated like Jesus returning with the Beatles.

It's certainly not a bad film, but one that could have benefited from some surprises to help make it stand out even more from the usual, gritty offerings of Mexican cinema.

There are no featured audience reviews yet. Click the link below to see what others say about 7 días!