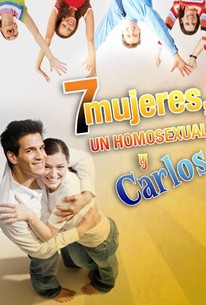 A young newlywed faces temptation at every turn in this romantic comedy from first-time director Rene Bueno. 7 Mujeres, 1 Homosexual y Carlos focuses on the travails of the title character, whose recent marriage is suddenly thrust into question when he starts a new job. There, he has to fend off the advances of flirty secretaries, resist peer pressure from his unfaithful boss, and even deal with an interoffice same-sex crush. After playing several Latin-American film festivals, 7 Mujeres was released direct-to-video in 2005.

There are no critic reviews yet for 7 Mujeres, 1 Homosexual y Carlos. Keep checking Rotten Tomatoes for updates!

There are no featured reviews for 7 Mujeres, 1 Homosexual y Carlos at this time.