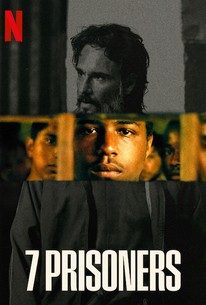 18-year-old Mateus (Christian Malheiros) hopes to provide a better life for his working-class family in the countryside. Accepting a new job in São Paolo, he is shuttled into the city with a handful of other teenage boys from his town, unaware of what awaits them: exhausting work in a scrapyard and their identity cards seized by a vicious taskmaster and exploiter, Luca (Rodrigo Santoro), who threatens them with the unthinkable if they try to escape. But, as Mateus learns, even the boss has a boss. And if he wants to find a way out, what will he have to become?

If the pay-offaims for the gut and misses, the journey to that point provides a searing microcosm of a corrupt and degrading system.

With "7 Prisoners," Moratto proves himself as a director of many talents.

The rather on-the-nose storytelling grows increasingly complex and interesting the further that the protagonist ventures into morally ambiguous territory.

This film about modern slavery is as emotionally gruelling as you might expect, with a story you need to be ready for. It is also one that will brilliantly wrongfoot you.

Rather than being a simple examination of a social problem, the film excels at excavating the deep-rooted, sprawling violence that affects everyone living under hierarchies of power.

Moratto's follow-up to his gem "Socrates" is gripping, well-acted and feels disturbingly like a documentary.

The line between victim and accomplice can be very thin, raising complex moral dilemmas.

It's a searing indictment of the systems that govern upward mobility - or lack thereof - as experienced and felt through the fully human experience of protagonist Mateus (Christian Malheiros).

A ingenious exploration of the way capital transforms its underclass into their own exploiters.

Formidable performances and a heart-wrenching story drive this disturbing drama from Brazil.

[Alexandre] Moratto portrays in a solvent way... that it's easier to be devoured by the system rather than change it. [Full review in Spanish]

There are no featured reviews for 7 Prisoners (7 prisioneiros) at this time.