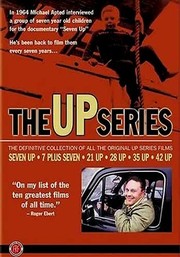 Harrison R
June 4, 2019
Can't really rate this one separately from the rest, but the entire series is amazing

Alan V
½ June 4, 2019
Great, although if you've seen any of the later films in the series, you've probably seen most of the material presented in these 39 minutes.

Dimity P
June 4, 2019
The kids are so damn cute...throughout the series, I often get annoyed at the questions they ask and in this one, the boyfriend/girlfriend seems completely pointless. Since they show the same clips in every subsequent one starting with "28 up" it probably isn't even necessary to watch this one. I would still recommend it though.

Jaime R
June 4, 2019
Documentary filmmaking at its finest (referring to all the UP documentaries).

Josh K
June 4, 2019
Possibly the longest running social experiment, and as much reflects on anthropological and sociological practices as the study on the actual participants in the films.

Anthony B
June 4, 2019
Partly a probing study of the way society shapes our children, mostly an irresistibly fun and funny portrait of those children.

June 4, 2019
An interesting concept. Will it be executed well? Who knows.

Aben R
½ June 4, 2019
This epic documentary series, updated every seven years, and now at 56 Up!, began with this brilliant 31 minute segment. Try to see the full series.

Arthur R
June 4, 2019
Fascinating, but ultimately its a little thin on substance, and understandably so. Nonetheless, it serves as a good base for how the series will develop further down the line.

Eric H
½ June 4, 2019
This is a great series, and to help out the last reviewer, the difference between a Comprehensive school, and a Grammar school, is that although they are both publicly funded schools, students have to pass an exam in order to enter the more prestigious Grammar school. In order to even things out in ...read moreBritish society (good luck) Grammar schools were eventually absorbed into the Comprehensives.Public schools are actually private schools in England and are for the well off. There is supreme snobbery between the 'top' public schools, and mere everyday private schools, and one can only imagine, the snobbery between the public schools in general, and the comprehensives. This reviewer unfortunately, did not have the luxury of simply imagining it all, having lived and survived through this social blitz.

Sue S
June 4, 2019
A lot of thought was given to selecting the kids representing the different classes (extreme though they might be), but there is an imbalance in gender, maybe because of the times. I'm already fond of Tony, the boy who wants to be a jockey -- plus he already has a girlfriend, Michelle!

Craig B
June 4, 2019
It's a little hard to believe that the first documentary in this series started a whole generation of follow-up reports. The thing is so darned quaint, I almost felt like I was watching an episode of "Kids Will Say the Darndest Things." Beyond the surprising differences that the questions elicited from children with wide-ranging socio-economic backgrounds, I felt like I was watching a government sponsored BBC fluff piece on the benefits of procreation. 7 Plus Seven changed that. I found the regularity and accuracy with which the children were able to predict the outcome of their lives - especially those from rich families - shocking. Apparently, money DOES open doors...in a very real and measurable way. I can't wait to see more of these films.

A mostly unintelligible and, surprisingly, less funny documentary than one would expect, considering the subjects being little 7-year-olds (gotten to accustomed to that whole "kids say the darndest things" business, I guess). The most interesting part of this documentary is not necessarily in the experiment they're performing- which would mean it would inevitably be more interesting as it progresses- but what is the most fascinating to listen to:

How these little 7-year-old kids think of such touchy conversation topics as money, politics, and racial issues.

Slightly better than its predecessor, though it's obvious the filmmakers are still having a hard time getting the kids to say anything. Most of them look very reluctant, and the big flaw I'm seeing with this series thus far is too many talking heads- show don't tell. I know they can't chronicle everything in 7 years (not expecting "Hoop Dreams" here), but showing more would make a better documentary.

A style is established, of showing clips from the first installment, and cutting to contrasting views of now. Yet again, it is when our participants talk about touchy issues that it is at its most interesting.

Ah, there's the lucky break I was waiting for! The big moral with an experimental series like this, which structures itself around time, is to be patient.

It seems the filmmakers realize how unsuccessful it was to pop information from when the participants were 14- clips are rarely used. Also dropped are the thoughts on racial issues- and I'm guessing that's for the sake of some of our participants. Some of them have become hippies, and I've noticed hippie culture always brings out the best in documentaries (love it or hate it, you just have to keep listening and keep watching: or, why "Woodstock" worked as a 4-hour film).

The third time around, it is finally immersive, and though longer than the first two combined, it moves twice as fast as either one. While still excessive in its use of talking heads, we do see some people at work- one of them in the progress of building a house, another we get to see our jockey in a horse race with people placing bets.

While structured to be accessible to those who have not viewed the previous installments, I think most of the people likely to view this would like to see it from the beginning- it does enhance the experience, though it's not an absolute requirement. Only at 21 do they start to allow us to get to know them.

To be perfectly honest, the two biggest problems here have to do with what the creators thought would be the problems facing Britain in the latter half of the twentieth century and the ones that they didn't foresee as being bigger. Out of the fourteen children, four are girls, because the rise of modern feminism didn't really begin until after this first one was made. And while racial issues would have been at the forefront in an American sampling made in 1963, even if class were considered the most important issue, the two have not been as completely entwined in the UK. Having only a single child with even a single parent who wasn't, well, a white British native was sufficient, because issues of immigration were yet to come at the level they have since done. In 1963, it was still possible to believe that class would be the driving force in British society, just as it always had been before.

To that end, the fourteen children were chosen. They were deliberately selected to show the extremes of the British class system, from the three boys introduced singing "Waltzing Matilda" in Latin and seemingly destined for Oxbridge and the same lives as their fathers to the two boys from a charity school to the boy who lived in the country and was one of only two children in his village--the other of whom was his younger brother. One of the girls was from an exclusive boarding school; all three of the others were from a primary school in the East End. The fourteen children were taken to the zoo, taken to a party, and apparently allowed to play in a construction site, the '60s being a very different time and all. They were also interviewed both about what their lives were like then and what they thought their lives would be like when they got older. Two, to my delight, wanted to be astronauts, though that was hardly an uncommon aspiration in those glory days of the space race.

To be perfectly honest, this half-hour of television by itself is not the most memorable thing going. What became important was that this was not the only documentary featuring these fourteen children. (Though not since 1977 has an installment involved all fourteen; Charles, one of the pre-preparatory boys, has refused ever since. Allegedly, he's even threatened to sue if his image keeps appearing in them.) What was important was not the documentary's predictive power, which has been so-so. What is important is it as a portrait of what life is like in (mostly) the UK every seven years. The most recent installment, [i]56 Up[/i], came out just last year, and according to what I've read, the lives have not reliably been what was expected when they were seven. Part of it, I think, is the societal changes--and part is that I don't really believe you can know at that age what life any child is going to lead, because class is only one of the factors involved in shaping any child.

I've meant to get around to this series for years. Technically, I shouldn't be here yet; it does not, after all, start with "P" or before. (Unless you go numeric, in which case I should have done it long since.) It appeared in my Netflix streaming options, and I was enchanted to discover that, while there is a lot of the series to get through (eight movies as of last year), the first section is an easily digestible half-hour. This left me with no more excuses, especially since I had only about two hours to go before midnight, and since I skipped yesterday, I would have felt guilty about skipping today as well. Getting something done, even so close to the wire, and watching a movie I'd meant to see since . . . possibly since I saw Gene and Roger review [i]35 Up[/i] or maybe even [i]28 Up[/i]. Even when I was not much older than the children in this first installment, I found the concept intriguing. I hope it gets better, but I do believe that this is something to be started at the beginning.

Is, in the end, class the driving force in the difference among British children? Was it then? I don't think so. Whether it's because of the half-hour length or because it didn't fit the proposed narrative, there are details left out. We hear nothing about Symon's absentee black father, at least nothing that I heard. We do not learn that the reason John was able to remain in expensive schools was that his mother (widowed two years after this installment) worked hard and that he got a scholarship to Oxford--though that, presumably, is more of a problem with the installments dealing with those periods. In fact, we hardly know anything about the parents, except that Bruce misses his father a great deal. I am no expert, of course, but I do think those parents, absentee and otherwise, have an influence on their children--possibly as great or greater than the influence of class. However, the various children are shown almost in a vacuum, as if all of Britain will be raising them together.

Joe H
June 4, 2019
A fascinating and at times humorous look at a cross-section of British children circa 1963. Have only watched up to the second installment thus far, but am already gripped...
Page 1 of 11