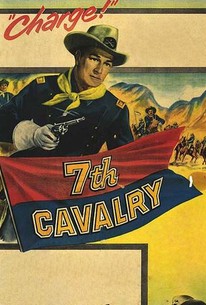 Though the film's title may suggest otherwise, Seventh Cavalry takes place after Custer's Last Stand. Randolph Scott stars as Cavalry officer Tom Benson, who is branded a coward after supposedly deserting at the Little Big Horn. Benson hopes to redeem himself by personally leading a burial detail to the battlefield, despite the fact that the Indians haven't exactly left the premises. The excitement level in the closing reels more than justifies the slow, steady buildup to the finale. Innovative direction by the reliable Joseph H. Lewis enlivens this verbose western. ~ Hal Erickson, Rovi

Al Wyatt
as Officer
View All

Disappointing Western, saved only by a few touches by director Lewis.

A serious work of historical note that is marred only by its contrived finale.

There are no featured audience reviews yet. Click the link below to see what others say about 7th Cavalry!