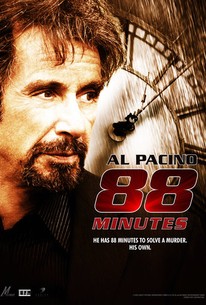 Critics Consensus: 88 Minutes is a shockingly inept psychological thriller that expertly squanders the talent at hand.

Critics Consensus: 88 Minutes is a shockingly inept psychological thriller that expertly squanders the talent at hand.

Critic Consensus: 88 Minutes is a shockingly inept psychological thriller that expertly squanders the talent at hand.

Jon Avnet directs Al Pacino in the thriller 88 Minutes. Pacino plays university professor Jack Gramm, who occasionally assists the FBI in matters of forensic psychiatry. His recent testimony against a freshly convicted criminal seems to be the reason he has gotten a scary phone call informing him he will die in 88 minutes. As with the like-minded thriller D.O.A. (both the original and the remake), the protagonist must use his skills in order to track down who has hatched this evil plot and hopefully prevent his own demise. Alicia Witt and Leelee Sobieski co-star as the professor's star students.

Victoria Tennant
as Kate
View All

Interestingly, the more overblown and insincere a performance Pacino delivers in a film, the more self-important and bouffant his hair gets. Here, it's so towering it takes up 90 per cent of the screen.

Now that this stupendously inept serial-killer flick has slithered into theaters, the diminutive legend had better clear room in his closet for another cinematic skeleton.

It verges on so-bad-it's-good territory, but just isn't entertaining enough. Lacking in tension and pace, poorly edited and starring wholly unsympathetic characters, this is just dull, drab and boring.

If you like your women half-naked, strung upside-down from pulleys, and sliced like deli meat, this is the movie for you. Whether the victims are more tortured than the plot is a serious question.

Nothing would give me keener pleasure than to reveal the identity of the killer, but a day after seeing the film I have genuinely forgotten.

A film so stuffed with shortcomings that they can't all be addressed in a single review.

Razzie Al at his absolute worst.

Pacino is magnetic no matter what he's doing, even if his surroundings aren't quite up to par.

Lacking tension in its setting and empathy for its characters, 88 Minutes is a woeful excuse of a thriller thanks to the inept direction by Jon Avnet, who has forgotten to inject emotion and thrills in what can only be described as a bloated crime movie.

88 Minutes is the sort of overblown thriller in which every action, no matter how insignificant, is pregnant with portent, yet it's a film of nothing but red herrings.

Pacino made me stick with it, and supporting players Alicia Witt and Neil McDonough weren't entirely awful. As for the rest of it... ugh. Terrible direction, and "Seattle" was so obviously Vancouver (with Canada Post trucks, Roots and Shoppers Drug Mart storefronts on the skyline and newsboxes for 24 Hours and Dose cropping up) that it hurt. Lazy location scouts, to say the least. The film had enough action and a still-got-it Pacino at its core, but it undercut every exciting scene with lengthy explanations of what was going on, which repeatedly killed the flick's momentum. What would also be interesting would a culprit with a motive, or an actor with more talent than Leelee Sobieski (that would be an actor with any talent whatsoever). The worst part of the film was the purported climax, and unfortunately, it overwhelmed the few bright spots the film had shown so far. Beyond Pacino, this one's a dud.

88 Minutes is the worst film of 2008. The film considering who was involved (Al Pacino) such a cinematic legend might of been good. Unfortunately, it wasn't this film is one of the worst films I have ever seen. The film also proves that even the greatest actors can make beyond aweful films. 88 Minutes relies on every crime cliche in crime thrillers, but unfortunately, this is a predictable piece of trash, because after all, we've seen it all before. Overused cliche as in the person youleast expect is the killer and so on. This is a pile of shit that should've never been made.

Director Jon Avnet released this film with Al Pacino just before "Righteous Kill" where he reteamed Al with Bob. If you have seen the disaster that was that film then you pretty much get the idea where this one is headed. In fact, if I were Bob DeNiro I'd be pretty peeved that Al never mentioned a word about working with Avnet, a director of such stinking magnitude. In brief, Pacino plays Dr. Jack Gramm a professor of criminal psychology who has also helped the police with the conviction of a serial killer who is soon to be executed. It transpires though, that the good Doctor Pacino may have got things wrong in his findings and it's also at this time that he recieves an anonymous phone call informing him that he has 88 minutes to live. Some feeble attempts at tension and plotting then ensue, with Al probably spending more than 88 minutes to blow-dry his ever increasing hairstyle. I can't believe I am wasting my time even writing about this film as it has already stolen more than enough from me. I do this as a warning to all. This is unequivocally the worst Pacino film ever and his worst performance. He spends a lot of the film on the phone and on second thoughts, he could have probably phoned in a better performance rather than wasting his (and our) time turning up. Never mind minutes, 88 Seconds is too long for this piece of trash.

Oh, Al Pacino, what happened? Once you were one of our most acclaimed thespians; now you star in crap like this "thriller," whose implausible storyline and ridiculous characters pale next to a performance in which you seem to be either half-asleep or yelling. And the worst part? The movie's 108 -- not 88 -- painful minutes long, which makes it both literally and figuratively the longest "88 Minutes" of our lives. Just as the passage of time teaches us that our parents aren't infallible and the government isn't populated by our best and brightest, so too does it ravage our greatest actors, turning them from quixotic artistes into by-the-numbers paycheck whores. Time replaces the edgy Robert De Niro of Taxi Driver and Raging Bull with the family friendly Analyze This version, while venerated talents such as Jack Nicholson and Gene Hackman stop making films like The Last Detail and The Conversation in favor of lowest common denominator bilge like The Bucket List and Runaway Jury. And then there's Pacino, whose knack for accepting almost every role offered him has obviously served as an example for contemporaries like Hilary Swank. So it shouldn't really surprise anyone to hear that 88 Minutes is one small step for bad filmmaking and one giant leap for the increasing insignificance of the former Michael Corleone. Here, Pacino plays Jack Gramm, a Seattle psychology professor whose side gig is playing forensics expert for the FBI (though judging by his impressive fake bake, he might also be moonlighting for Hollywood Tan). Nine years ago, his testimony was instrumental in sending Jon Forster (Neal McDonough) to death row for the rape and murder of a young Seattle woman. Now Forster is mere days from execution, when another murder committed in eerily similar style casts doubt not only on the prisoner's guilt (though to be fair, could anybody as creepy looking as McDonough be innocent?), but on Gramm's credibility as well. Oh, and somebody with a voice modulator just called Gramm to tell him he has 88 minutes to live. This film goes off the rails so early and so often it's hard to target specific areas for ridicule. From each preposterous twist to each increasingly absurd action sequence, 88 Minutes is as dumb a movie as you're likely to see this year, and may go down as Pacino's worst ever. And while we're at it, what is up with that hair? I'm not a guy who generally notices continuity errors, but when even I can see the main character's hair (or toupee, or whatever the hell that is on his head) changing styles, parts, and frizz from scene to scene, it must be pretty blatant. Unfortunately, it wouldn't matter if Pacino was as bald as John Travolta, 88 Minutes is pure, unadulterated crap.