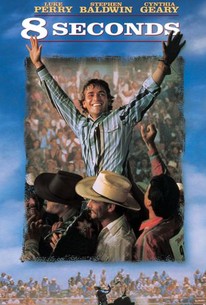 Luke Perry stars in this biography of the late Lane Frost, a champion bull rider who in 1987 won a rodeo world championship at the tender age of 21. In Eight Seconds (the title refers to the minimum amount of time a rider must stay on a bull in competition), Lane Frost is a young man from Oklahoma who learns to ride, hoping to win the approval of his emotionally distant father. As Lane works his way up the rodeo circuit with his best friend Tuff Hedeman (Stephen Baldwin), he meets Kelly Kyle (Cynthia Geary), a pretty barrel-race rider with whom he falls in love. Lane and Kelly marry, but Lane stubbornly refuses any help from Kelly's wealthy parents, forcing the young couple to live a hand-to-mouth existence, and while Lane's dedication to rodeo and its fans earns him a devoted following, it also keeps him away from Kelly and threatens to sink their relationship. Lane's hard work pays off when he wins the 1987 world championship, but the danger of the sport catches up with him two years later, when he dies as a result of an accident during competition. Country star Vince Gill appears onscreen with his band; keep an eye peeled for a brief appearance by Renee Zellweger, two years before her breakthrough role in Jerry Maguire. ~ Mark Deming, Rovi

George Michael
as Himself

John Growney
as Himself

[Luke Perry] looks capable of rising above the fanzine drivel and proving himself a real actor. But this isn't quite the movie.

A lot of bull.

The title implies how long you'll be able to sit through it.

A great film about the legendary bull rider "Lane Frost." Love it still.

Luke Perry is great in his bull riding stunt scenes that makes him look real for his real-life Lane Frost role.

Good but a bit of a downer.