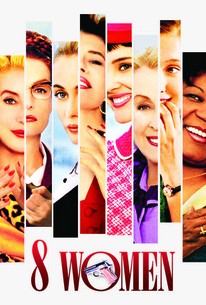 At an isolated mansion in the snowy countryside of 1950s France, a family is gathered for the holiday season... But there will be no celebration--their beloved patriarch has been murdered! The killer can only be one of the eight women closest to the man of the house. Was it his powerful wife? His spinster sister-in-law? His miserly mother-in-law? Maybe the insolent chambermaid or the loyal housekeeper? Could it possibly have been one of his two young daughters? A surprise visit from the victim's chic sister sends the household into a tizzy, encouraging hysterics, exacerbating rivalries, and encompassing musical interludes. Comedic situations arise with the revelations of dark family secrets. Seduction dances with betrayal. The mystery of the female psyche is revealed. There are eight women--and each is a suspect. Each has a motive. Each has a secret. Beautiful, tempestuous, intelligent, sensual, and dangerous... One of them is guilty. Which one is it?

Dominique Lamure
as Marcel
View All

Seduction is more important than deduction in this chic display of star quality to the eighth power.

For all the tumultuous entrances and flouncing exits, the eight principals manage maybe three laughs among them.

A note of genuine sadness sneaks through at the end, but for the most part, enjoying 8 Women involves coming to terms with its artificiality and learning to appreciate it from a distance. Behind all that thick glass, it's still a work of art.

The cast is the main attraction in Francois Ozon's witty, even touching 8 Women.

The writing is very clever and it is a hoot watching the celebrated cast ham it up.

The French screen royalty assembled by Ozon and the film's sheer exuberance in its own artifice make this a delight from beginning to end.

The film weaves visual elegance, lesbian subtext, six hilariously inappropriate song-and-dance numbers and a flair for chiffon into a showcase for leading ladies of French cinema past and present.

A dubious proposition for the Francophobic, but it acquits itself with a script so ridiculous that it can't help but be engaging.

8 Women is meant to be a sampler with the likes of Deneuve, Darrieux, Huppert, Ardant and Beart as its treats. But the confectioner has arrived at pretty poison.

Pure joy. That's what you will feel as you float out of the theater after seeing this wacky musical whodunit starring several of France's most accomplished and best known actresses.

An Agatha Christie drawing room mystery crossed with the '50s setting and melodrama of Douglas Sirk crossed with the musicality of Jacques Demy with some Aaron Spelling bitchery thrown in for good measure.

There cannot be many people who wouldn't want to pay to see Deneuve smash a bottle over the head of an old woman in a wheelchair.

I actually really enjoyed this movie. It was strange and they kept breaking out in song for no apparent reason. It was a movie I could recommend to that guy who always came into FYE and asked for movies that take place in one place (the movie takes place entirely in a house, almost in just one room). It's definitely not a movie for everyone but if you like quirky foreign films, give it a chance.

So bad it's good. With IMDb genre tags of Musical, Comedy, and Crime, it pretty much has to be. The songs are farcical nonsense - all character songs, nothing to further the plot - and the cinematography is staid, but I'm pretty sure that's intentional. Nevertheless, it's nice to see all these beautiful legends of French cinema camping it up. Isabelle Huppert and Fanny Ardent are scrumptious. I want Emmanuelle Beart's face. Silence of the Lambs-style. Just cut it off and wear it.

A bizarre and quirky French musical murder mystery. Each character reveals new plot points and has something to hide. The songs are beautifully written and well executed. The costumes and set design help to create a realistic atmosphere.