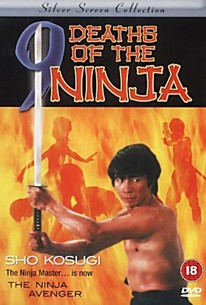 9 Deaths of the Ninja Photos

Meant to be a parody of the martial arts genre, this weakly plotted story centers around a kidnapping in Manila engineered by two terrorists to obtain the release of a political prisoner in the Middle East. In order to save the busload of tourists that are being held hostage, the U.S. Embassy summons three international agents: Spike Shinobi (Sho Kasugi) who, inspired by Kojak (Telly Savalas' TV detective), puts a lollipop in his mouth in-between fights, Steven Gordon (Brent Huff), and Jennifer Barnes (Emilia Lesniak). The trio are up against the deranged German Alby the Cruel (Blackie Dammett) and the sadistic lesbian Honey Hump (Regina Richardson), the terrorists holding the tourists. Wild exaggeration in-between the karate action is meant to bring humor to the proceedings.

Blackie Dammett
as Alby the Cruel

Critic Reviews for 9 Deaths of the Ninja

I wasn't really aware that movies this bad actually made it to our local theaters. But they do, and I have the bruises both mental and physical to prove it.

Audience Reviews for 9 Deaths of the Ninja

There are no featured audience reviews yet. Click the link below to see what others say about 9 Deaths of the Ninja!

9 Deaths of the Ninja Quotes