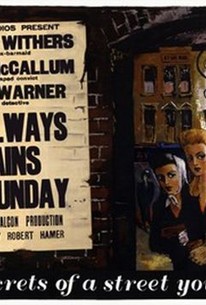 After the war, British films began avoiding the heiresses and lordships that had dominated the drama field and began pursuing "realism" -- which often was just as artificial as the earlier white-telephone pictures. John McCallum plays Tommy Swann, a product of the working class who tries to better himself by becoming a criminal. Escaping from prison, Swann hides out in the East London home of his former mistress Rose (Googie Withers), who has since married George Sandigate (Edward Chapman). The film is told from Swann's point-of-view, and a dismal view that is. Nor does Rose seem any happier with her drab lot in life. Swann's return does nothing but further their misery, tearing Rose' family apart and sending Swann back into the arms of the law. Considered a tension-laden slice of life in 1949, It Always Rains on Sunday seems a bit contrived today, though it does full justice to the Arthur La Bern novel on which it is based -- especially when the film leaves the environs of the house and zeroes in on its colorful roster of bit actors. ~ Hal Erickson, Rovi

Betty Baskcomb
as Barmaid of the `Two Compasses'

Gilbert Davis
as Pub Owner of the `Two Compasses'

Critic Reviews for It Always Rains on Sunday

It Always Rains on Sunday might be called "kitchen-sink noir."

A breathtaking melange of romance and crime drama. A British classic.

The drama is managed without condescension and with enormous skill.

Hamer's artful and iconoclastic film mixes a day in the life of a working-class family with a startling prison-break melodrama.

A resolutely downbeat - remarkably so for Ealing Studios - account of a day in the life of Bethnal Green...

Though the background of this film is carefully done, and direction and acting good, it is a sordid and dreary affair.

This saga of interconnecting lives is one of Ealing's more successful non-comedies.

A film as good as, and arguably better than, anything comparable being made at the time on the continent or in the States.

This is a mostly forgotten gem.

Audience Reviews for It Always Rains on Sunday

a nearly forgotten postwar noir from ealing studios; a rich slice of lower class life in london's east end. googie withers plays a tough housewife, settled in with older husband and stepkids, whose sense of adventure is rekindled when her lost lover escapes from prison and turns up on her doorstep. lovely grimy desperation ensues. considered a precursor to kitchen sink dramas of 60s british cinema. this was my first experience with amazon on demand, good quality and if they keep turning up gems like this it won't be the last

[font=Century Gothic]"It Always Rains on Sunday" is a movie that is impressive, complex and ahead of its time in depicting the citizens of an East End London neighborhood in a series of interlocking tales during a single day.(For example, one of the families portrayed is Jewish but they are not stereotypes.) This is a working class neighborhood where the people work hard during the week but their one day of rest, Sunday, when they would like to get out and about, it rains which is symbolic of their entire situation. So to escape, they go to the market, the cinema, the pubs, the fights or a nightclub. At the same time, some are desperate enough to resort to crime which even though it is occasionally violent, is usually theft-related but it never pays. A trio of hapless burglars attempt to break into a safe but only manage to steal 144 pairs of roller skates. Another thief, Tommy Swann(John McCallum), has just escaped from Dartmoor leading Detective Sergeant Fothergill(Jack Warner) to see if any of his old friends might know where he is hiding. One person he talks to is Rose Sandigate(Googie Withers) who used to be involved with Tommy but is now married to George(Edward Chapman), 15 years her senior.[/font]

It Always Rains on Sunday Quotes