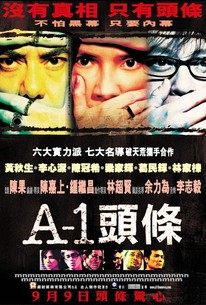 A fashion columnist investigates her boyfriend's death with the help of two debt collectors and a newspaper photographer, uncovering evidence of a vast conspiracy that reaches to the highest ranks of the corporate world. Convinced the car crash that claimed her boyfriend's life was no accident, Ling convinces eye-witnesses Fei and Ma to tell her exactly what they saw. When Ling's editor Tsang begins to exhibit some particularly troubling behavior, the probing reporter realizes she's on the right track. Joined in their quest for the truth by observant shutterbug Kei, Ling, Fei, and Ma finds her story threatened upon discovering that a powerful tycoon has just purchased the newspaper Ling works for, and seems to have his own ideas about what the headlines should read. ~ Jason Buchanan, Rovi

Critic Reviews for A-1

There are no critic reviews yet for A-1. Keep checking Rotten Tomatoes for updates!

There are no featured reviews for A-1 at this time.