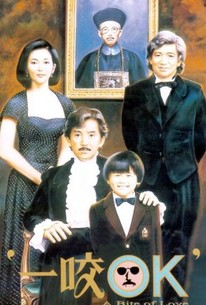 A Bite of Love Photos

Hong Kong filmmaker Stephen Shin (Black Cat) directed this vampire comedy, one of the few to eschew the native gyonsi subgenre in favor of Western vampire lore (the same year's Doctor Vampire was another). George Lam toplines as Duke Lee, an upper-class vampire who drinks only animal blood and looks down on those who attack humans. Lee is in dire financial straits, but while he is facing bankruptcy and the loss of his British castle, he falls in love with a beautiful young woman named Anna (Rosamund Kwan) and shows his philanthropic side by using his own blood (which contains special restorative powers) to save the life of a young boy. That's when Anna's brother, a ruthless mob heroin dealer, decides to kidnap the Duke and the boy so he can use their blood to cure his own terminal illness. Numerous comic situations and in-jokes (including a clip from the American vampire spoof Fright Night make this a breezy diversion, nicely photographed by Cheng Siu-keungand co-starring Norman Tsui and Hui Siu-hung.

Pak Lam Cheng
as The kid

Critic Reviews for A Bite of Love

There are no critic reviews yet for A Bite of Love. Keep checking Rotten Tomatoes for updates!

There are no featured reviews for A Bite of Love at this time.

A Bite of Love Quotes