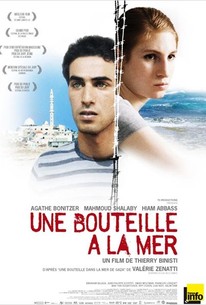 A Bottle in the Gaza Sea Photos

17-year-old Tal has emigrated from France to Jerusalem with her family. She writes a letter expressing her refusal to accept that only hatred can reign between Israelis and Palestinians. She slips the letter into a bottle, and her brother throws it into the sea near Gaza, where he is carrying out his military service. A few weeks later, Tal receives an e-mail response from a mysterious "Gazaman," a young Palestinian named Nam. Thus begins a turbulent but tender long-distance friendship between two young people that are separated by a history they are trying both to understand and change. This engrossing and hopeful drama starring Hiam Abbas is based on the award-winning novel by Valrie Zenatti. (c) Film Movement

François Loriquet
as Thomas
View All

News & Interviews for A Bottle in the Gaza Sea

View All A Bottle in the Gaza Sea News

Critic Reviews for A Bottle in the Gaza Sea

It raises the hope that someday, perhaps, there can be a meeting of Israeli and Palestinian minds.

A gentle pairing of youthful idealism and tenacious hope.

What elevates [it] ... is the gentleness with which Binisti approaches his difficult subject.

Although smoothly directed, A Bottle in the Gaza Sea has little visual personality or dramatic urgency.

The film's notion that a little understanding and a lot of e-mailing would basically solve the Middle East crisis ... is as reductive as it is utopian.

The film obviously can't resolve the conflict between Palestine and Israel, but the resolution to the story's arc feels nonetheless forced and misplaced.

Sure, it has something to say, but it hardly feels like its out to change the world -- only a very small part of it. And it succeeds with sincere feelings and a beguiling charm

This is the story of people who dream big dreams and find a common understanding in the face of impossible difficulties. It's hard not to get behind that.

Yet another impressive dramatic take on the endless Middle East impasse and attendant violence.

A teenage immigrant from France living in Israel and a Palestinian youth try to break down the barriers that separate them.

A Bottle In The Gaza Sea is a well-meaning but rather insistently earnest plea for mutual understanding between Israelis and Palestinians.

The initially cynical Naim suggests Tal's project is insignificant, nothing but a bottle of hope bobbing about in a sea of enmity - and so too this film.

Audience Reviews for A Bottle in the Gaza Sea

There are no featured audience reviews yet. Click the link below to see what others say about A Bottle in the Gaza Sea!

A Bottle in the Gaza Sea Quotes