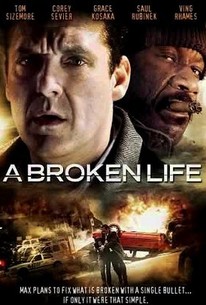 Overwhelmed by the soul crushing mediocrity of his life and hopelessly embittered by his overbearing boss and cruel ex-wife, a suicidal man recruits a struggling filmmaker to document his last day on earth. Max Walker (Tom Sizemore) is a man consumed by the emptiness inside. He's tired of this world, and at the end of the day he plans on putting a gun to his head and pulling the trigger. But quite a bit can happen over the course of twenty-four hours, and before that fateful bullet is fired there is much to be done. Determined to capture the events of the day for posterity, Max bestows sympathetic film student Bud (Corey Sevier) with a video camera and instructs him never to stop filming no matter what happens. Later, as Max roams the city confessing past misdeeds, sharing epiphanies, and railing against the injustices of the world, Bud makes good on his promise to capture every captivating moment. Finally freed from the rules of society and determined to live by his own rules, Max proves himself a man of deep emotional complexity as he commits random acts of heroism and shocking acts of insanity. The last order of business for Max is to confront his uncaring boss and his callous ex-wife, but just as his rage reaches a boiling point he finds his mission suddenly turned upside down due to the kindness of a young woman in a wheelchair. As the end of the day draws near and Max prepares for his final scene, one shocking revelation promises to change the lives of everyone involved. ~ Jason Buchanan, Rovi

Ving Rhames
as The Vet

Saul Rubinek
as The Boss

Critic Reviews for A Broken Life

There are no critic reviews yet for A Broken Life. Keep checking Rotten Tomatoes for updates!

There are no featured reviews for A Broken Life at this time.