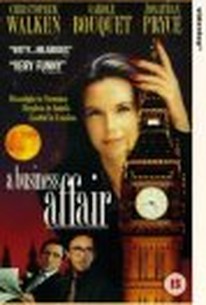 This romantic comedy concerns Kate Swallow (Carole Bouquet), who works in a French department store to help support her husband Alec (Jonathan Pryce), an egocentric novelist who insists on peace and quiet when he writes. Kate has literary aspirations herself, but Alec complains that the clacking of the keys on her laptop is too much of a distraction for him (he prefers to write longhand). Alec's editor Vanni Corso (Christopher Walken) has high hopes for his next book, which needs to sell well if his company is to pull itself out of the red. While Vanni is interested in Alec's novel, he also becomes interested in Alec's wife, and Kate becomes quite taken with Vanni as well. In time she leaves Alex to pursue a relationship with Vanni and work on her own book. Kate's novel turns out to do quite well indeed, but there's trouble in paradise when Vanni tells her he's not so sure her second novel is going to go anywhere. Business Affair was loosely based on the real-life literary and romantic travails of author Barbara Skelton. ~ Mark Deming, Rovi

Critic Reviews for A Business Affair

A Business Affair is bad beyond the power of criticism to evoke.

A lively parable about how some husbands under-appreciate the creativity of their wives.

Though it's well-written and well-acted, it's still a fluff piece.

There are no featured reviews for A Business Affair at this time.